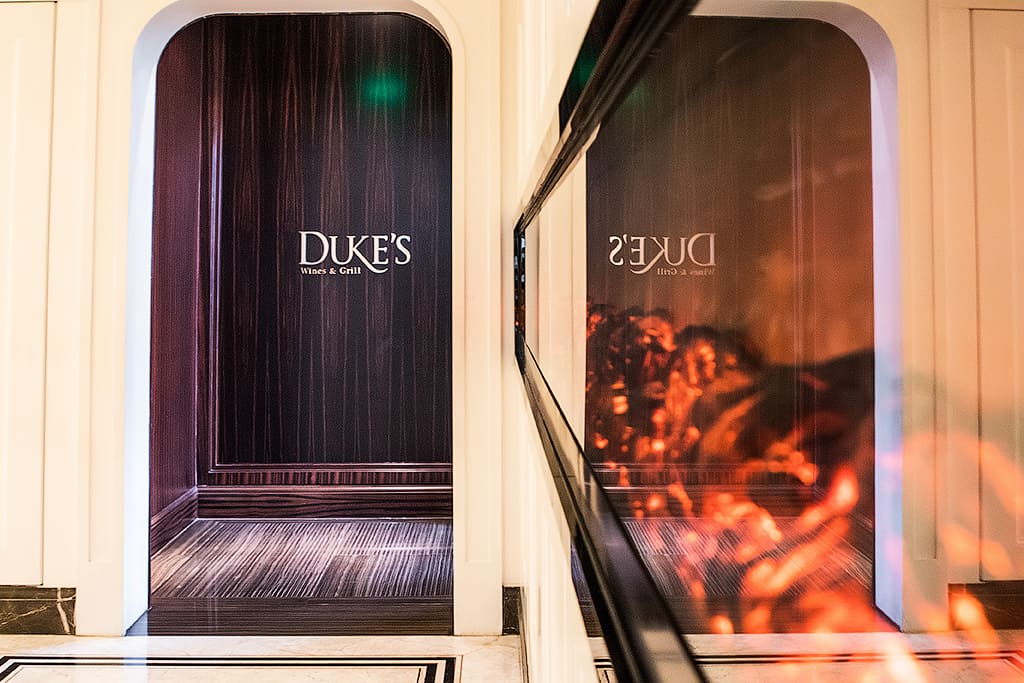 What makes a classy restaurant? Well, there is the understated décor and stately furniture. There’s the number of bottles in the wine cellar. There’s the grade of the steak and where the oysters come from.

But there are also those small, almost indefinable, details. The way the light illuminates the room. The way the waiter appears and disappears as if they are reading your mind. The way the music slowly lures you in.

Rather than try defining what makes a classy restaurant, it might be easier for me to give you an example. Allow me to introduce you to Duke’s Wine & Grill at The Langham, Shenzhen. 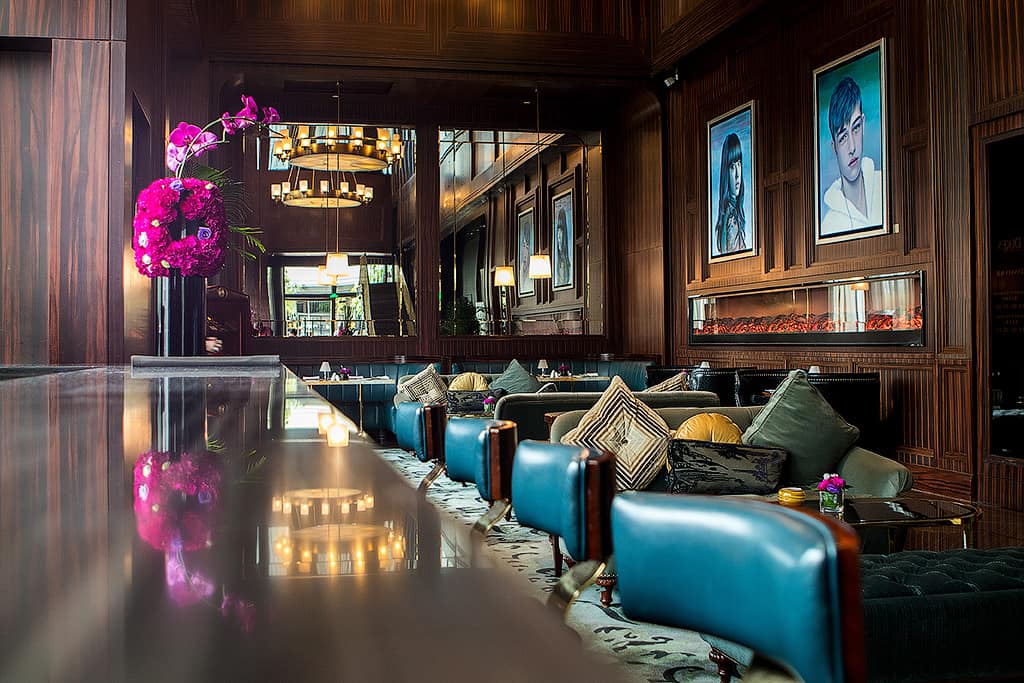 They say first impressions are important. This is equally true when going to a new bar or restaurant as it is when meeting someone, if not more so. Well, when I first entered Duke’s Wine & Grill, the restaurant certainly made a strong impression.

My eye was drawn from the classic leather couches and tub chairs to the contemporary art adorning the walls to the high ceilings. Duke’s was lively and was already brimming with the kind of atmosphere you associate with a jazz bar.

I took a table and the manager offered to introduce me to the wine cellar upstairs, to which I duly obliged and he led me to the second floor of Duke’s where the wine cellar is located alongside a private dining room. 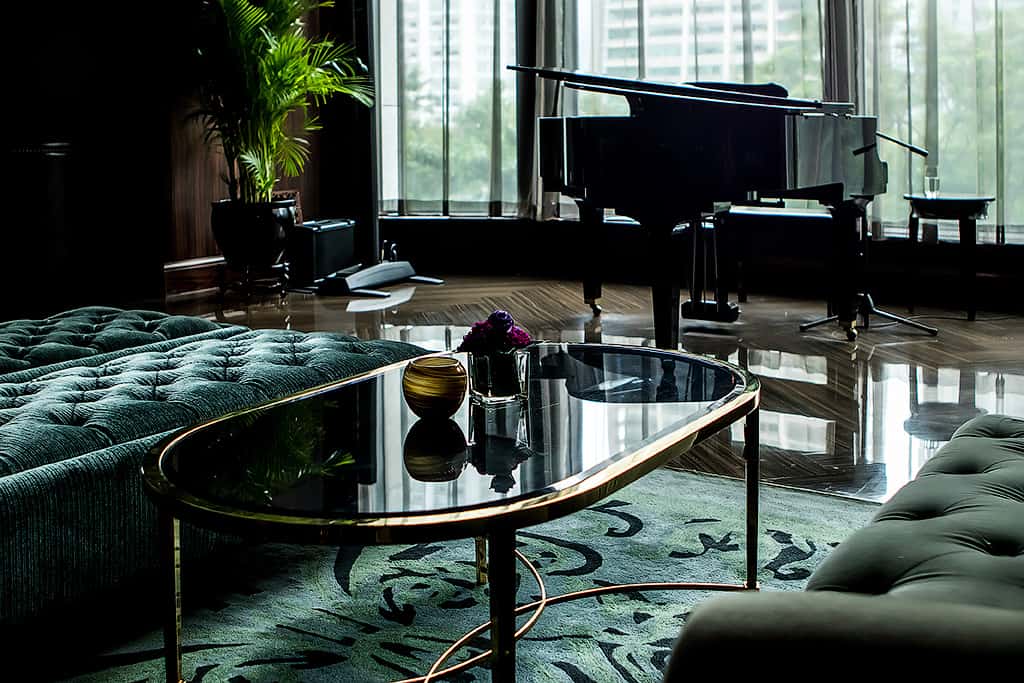 I walked along the wine selection, all 394 varieties of them, and reading some of the labels it was clear why Duke’s Wine & Grill had been awarded 3 Wine Glasses at the Wine List of the Year Awards. Chateau Le Pin from Pomerol, Pinot Noir from Domaine de la Romanee-Conti from Bourgogne, and Chateau Ausone from Saint Emilion were particular gems in what was a treasure trove from the world’s finest wineries. After exploring the wine list, I settled on a bottle of one of the house whites. The Cloudy Bay Sauvignon Blanc from Marlborough came highly recommended by the manager.

If you prefer a fine single malt or a blended Scotch, then you can explore the extensive spirits list. Highlights include Hibiki 17 Years, Macallan 25 Years, and Royal Salute 38 Years. Duke’s Wine & Grill also boasted an impressive choice of imported cigars. The limited run of Cohiba Talisman 2017 Edition, in particular, caught the eye.

I headed back downstairs to my table and started to peruse the food menu. As I flicked through the pages, it quickly became apparent that Duke’s Wine & Grill boast one of the most delectable selections of dishes around; from the Anceline Oysters from France, the Beluga Caviar, the Canadian Lobster, to the Australian Wagyu Tomahawk Steak. Duke’s Wine & Grill only serve the finest of the fine. 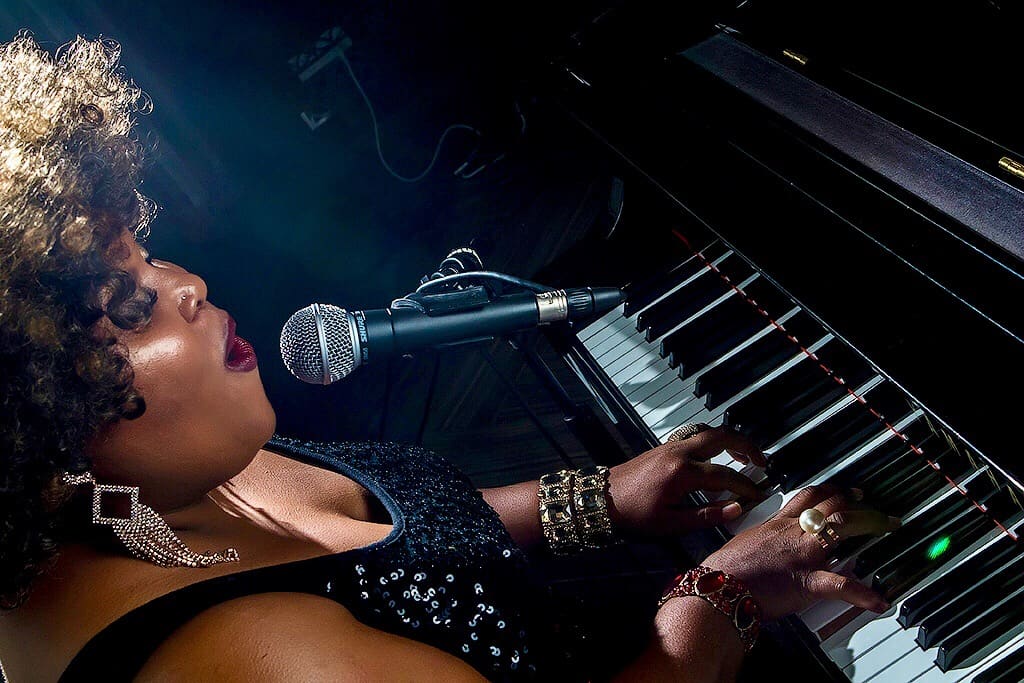 As I ordered some dishes, the entertainer for that evening took to the stage and sat behind her piano ready to play. She introduced herself as NaTasha Rogers and when she started her set with a silky smooth rendition of This Masquerade by George Benson I knew we were in for something special that evening.

NaTasha quickly captivated the entire restaurant as she moved on to the Jazz classic Autumn Leaves. By the time she had started to play Lovin’ You by Minnie Ripperton, she had already cultivated that special kind of ambiance, which you only feel in the best Jazz bars.

Soon after, our dishes began to arrive. First up was Duke’s Signature Salad, an intriguing mix of Oyster, Avocado, Bergamot Pear, Manchego Cheese, and Quinoa. The chef struck just the right balance between sweet and savory to deliver a healthy salad you will want to keep coming back to. 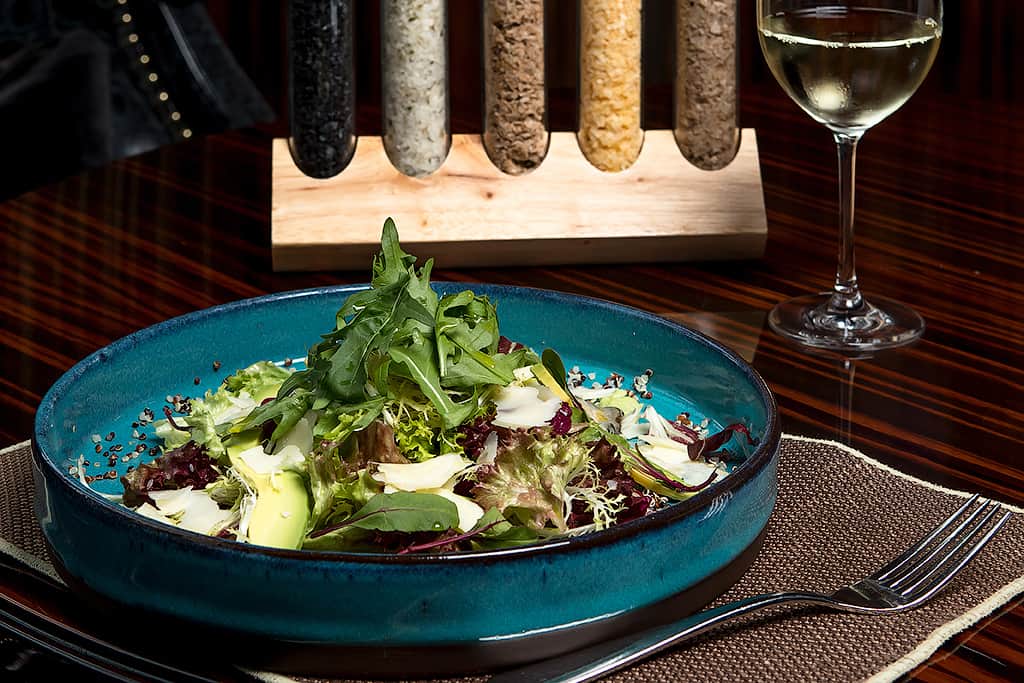 Next was a favorite of fine-dining restaurants in China, the Pan-fried Foie Gras. The foie gras is served with mango chutney, which really brought out something new in the dish, and a candy brioche, which was somewhat of a surprise selection but paired unexpectedly well with foie gras 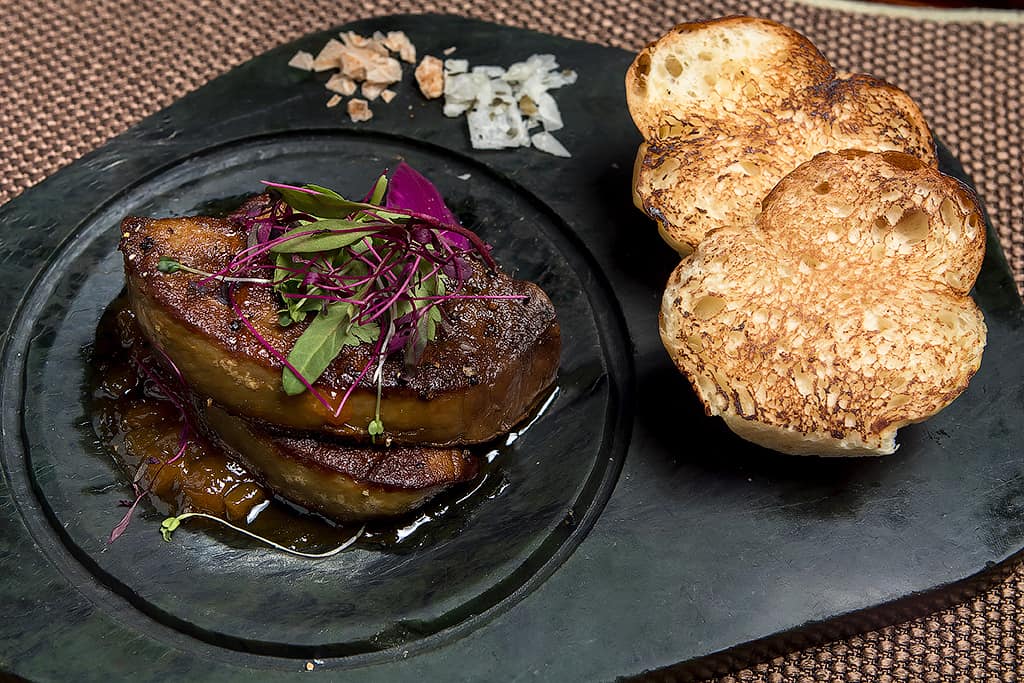 After the Foie Gras, the Silver Cod Fish Filet arrived, 180 grams of the freshest and most succulent cod available. The cod was expertly matched with a basil clam sauce and came with a side of the softest baby potatoes and pearl vegetables. 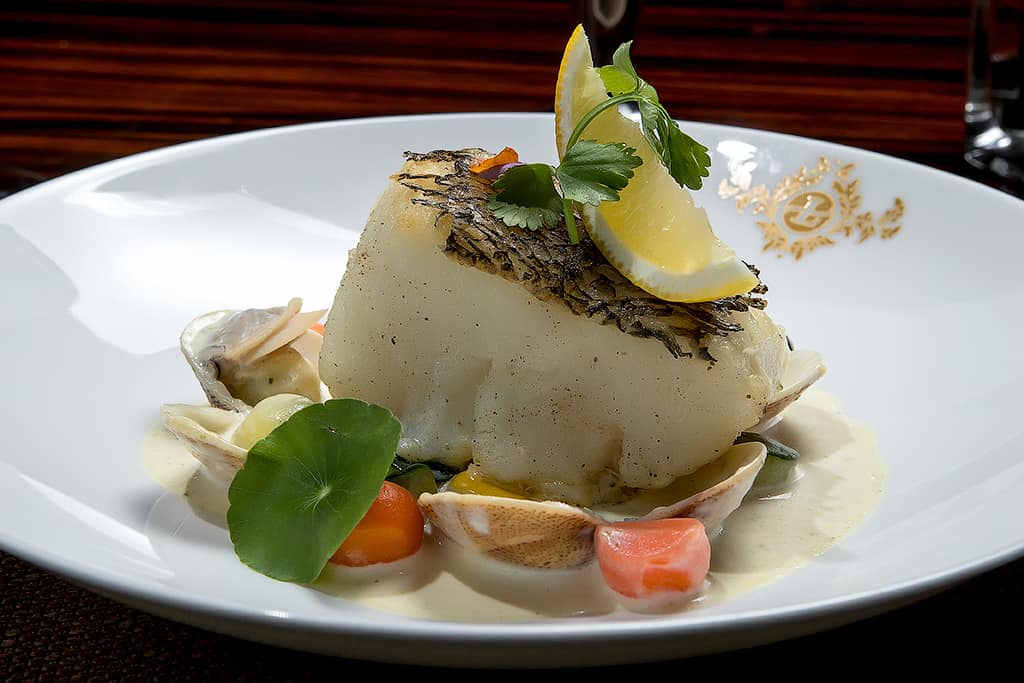 The final dish was something from Duke’s Wine & Grill’s meat selection. As tempted as the Australian Wagyu Tomahawk looked, I opted for the Salt Marsh Coastal Lamb Loin. Imported from New Zealand, the lamb loin was cooked with parsley, garlic, and breadcrumb, and presented with a rosemary and thyme sauce. The vegetables and herbs really offered the perfect balance to the dish. 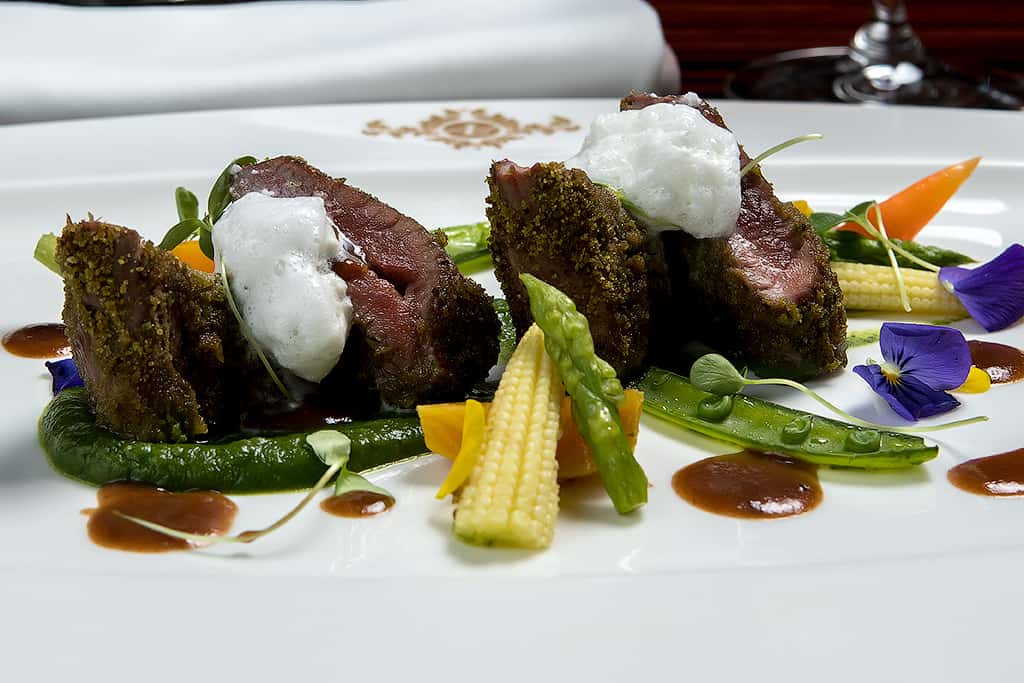 After another glass of the house white and a couple more songs from NaTasha, it was time for dessert. The intriguingly named Tropical Explosion certainly lived up to its name. The tropical mango’s crispy exterior betrayed the rich mousse inside while the passion fruit ice cream sprinkled with coconut melted in the mouth.

Later that evening, I had a chance to chat with the Western Executive Chef, Fabrice Bruto. When he talked about his dishes, there was one element that ran through them all. For him, it is not about where a dish originated from, but the connection between the elements. It is about creating combinations and contrasts resulting in new flavors and sensations.

Before he left, he recommended that next time I try the Venison Rossini Burger, which sounds like the king of gourmet burgers; Venison Patty with Foie Gras and Black Forest Ham topped with Iberico Cheese, Arugula, and Caramelized Red Onions, served in a Brioche Bun with a side of Homemade Truffle French Fries.

I left Duke’s Wine & Grill having thoroughly enjoyed my evening and being reminded what a restaurant is capable of being. While it may be debatable what exactly makes a restaurant classy, there is little doubt that Duke’s is one of, if not the, classiest spots in Shenzhen. 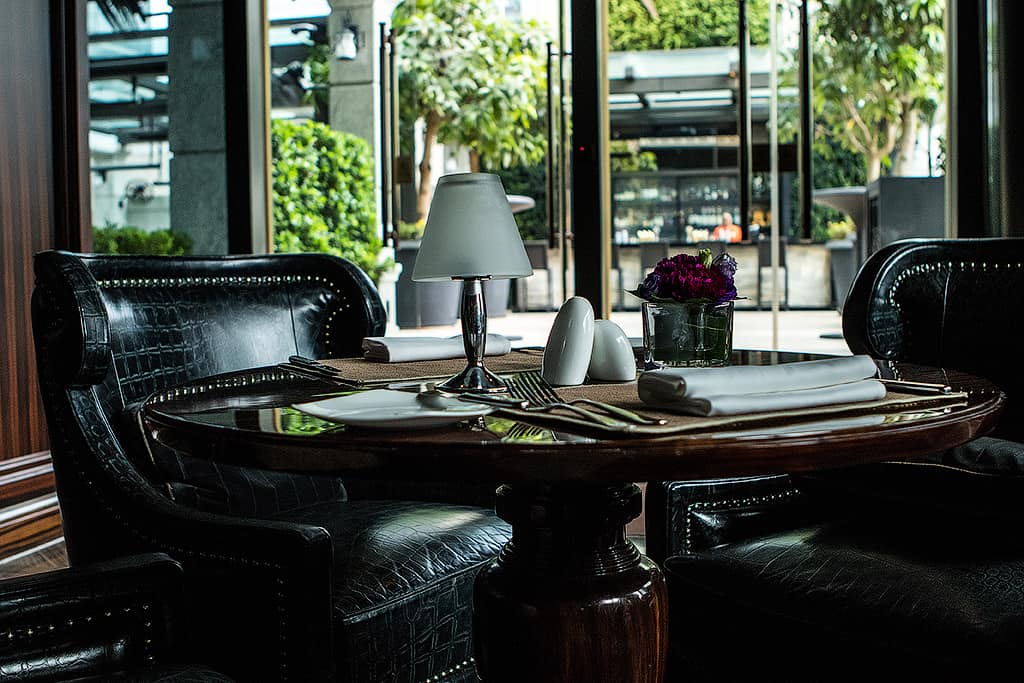