The Wyndham Grand, Futian, doesn’t do events by halves, and Halloween this year was no exception. The Grand Kitchen, the Wyndham’s buffet restaurant, was host to the Halloween Buffet Dinner. No word could be used to describe it other than ‘spectacular’. 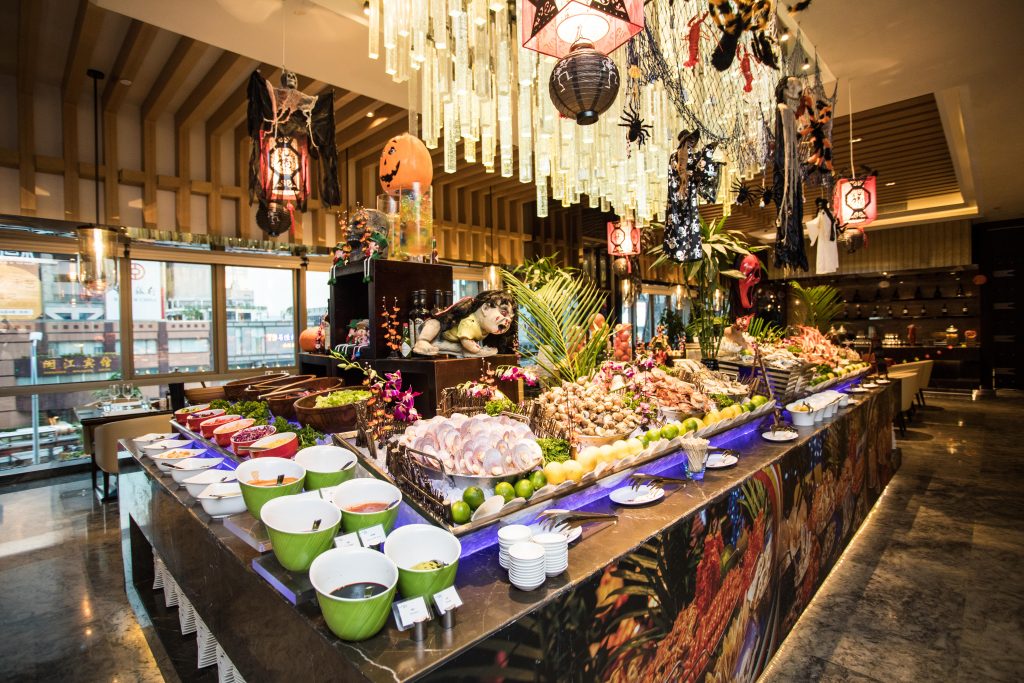 As soon as the elevator doors opened on the third floor, you were greeted by Halloween decorations and spooky sounds. Cobwebs were draped over light fittings; staff were dressed in cloaks and witches hats, with the occasional addition of scars, vampire teeth or dripping blood; skeletons and skulls caught your eye in every direction. 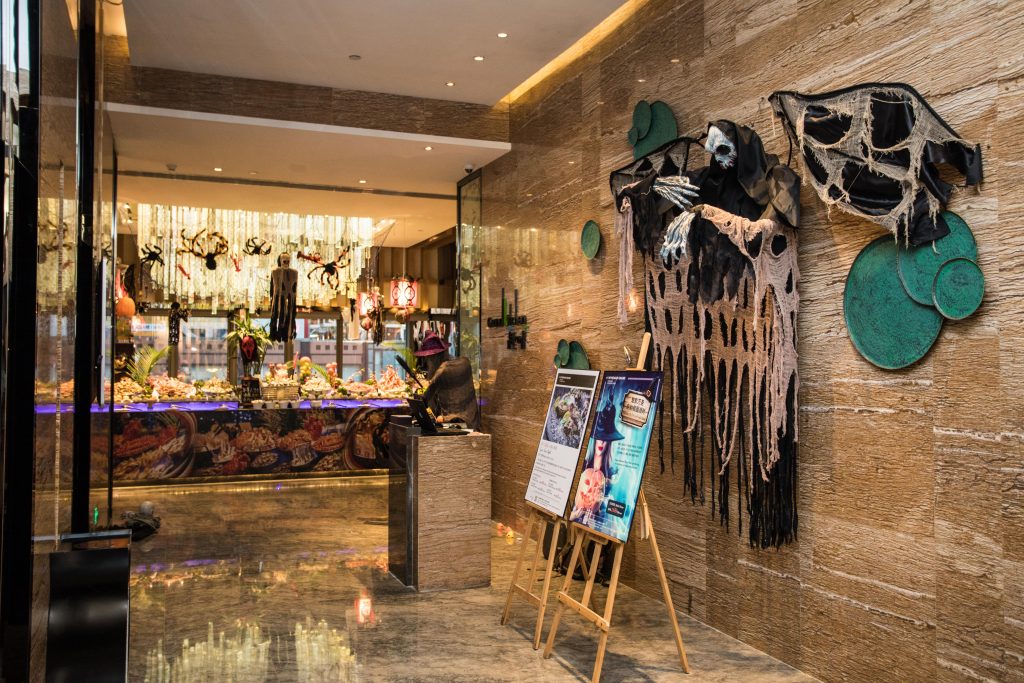 The most remarkable aspect was the amount of effort that had obviously gone into the Halloween themed food. Even the bread was shaped like ghostly faces! 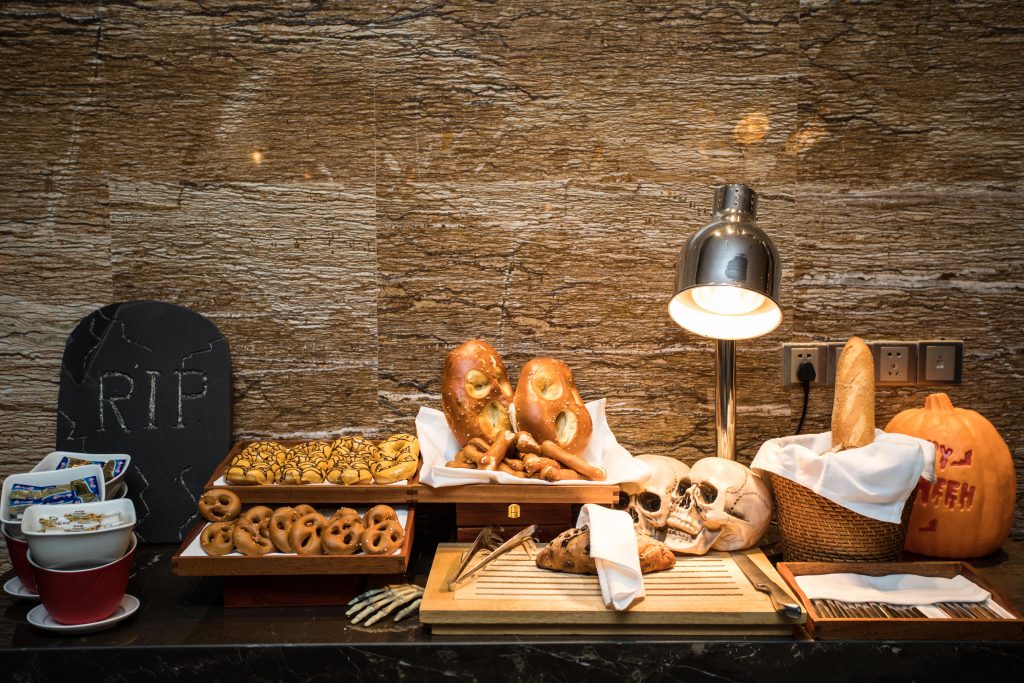 From 6pm to 9.30pm over 100 people came to spend Halloween eating sumptuous savouries and delectable desserts. Appetizers included a selection of Asian-style and Western-style salads, as well as ‘design-your-own’, sushi, sashimi and an array of imported seafood – the Grand Kitchen’s specialty. 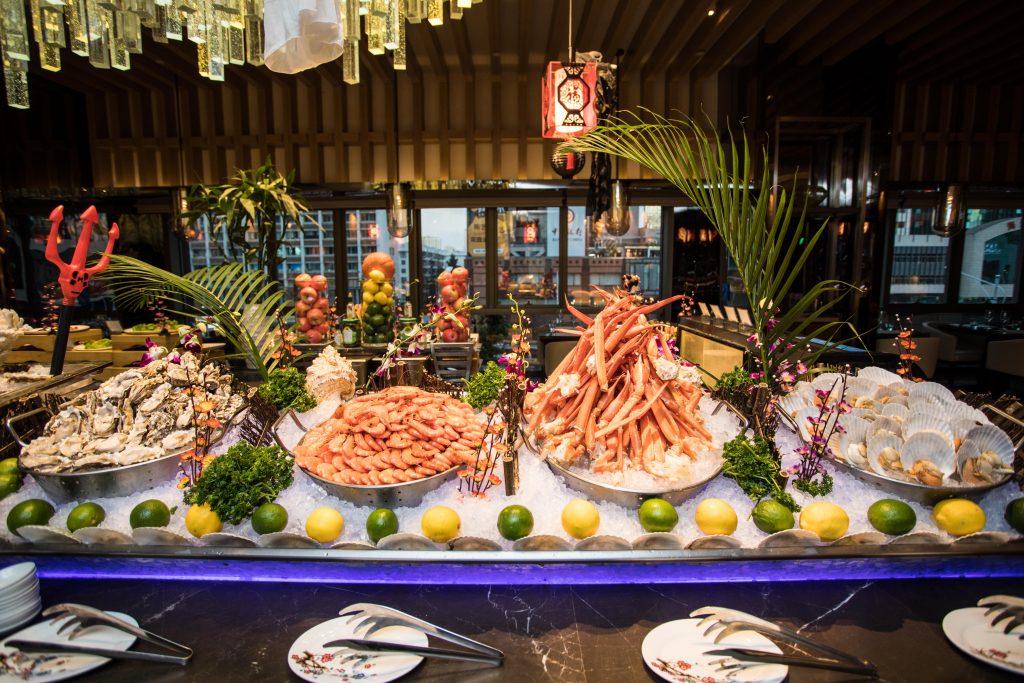 Everything from New Zealand scallops to oysters from Iceland, Alaskan salmon to South American shrimp, was available for the guests’ delight. 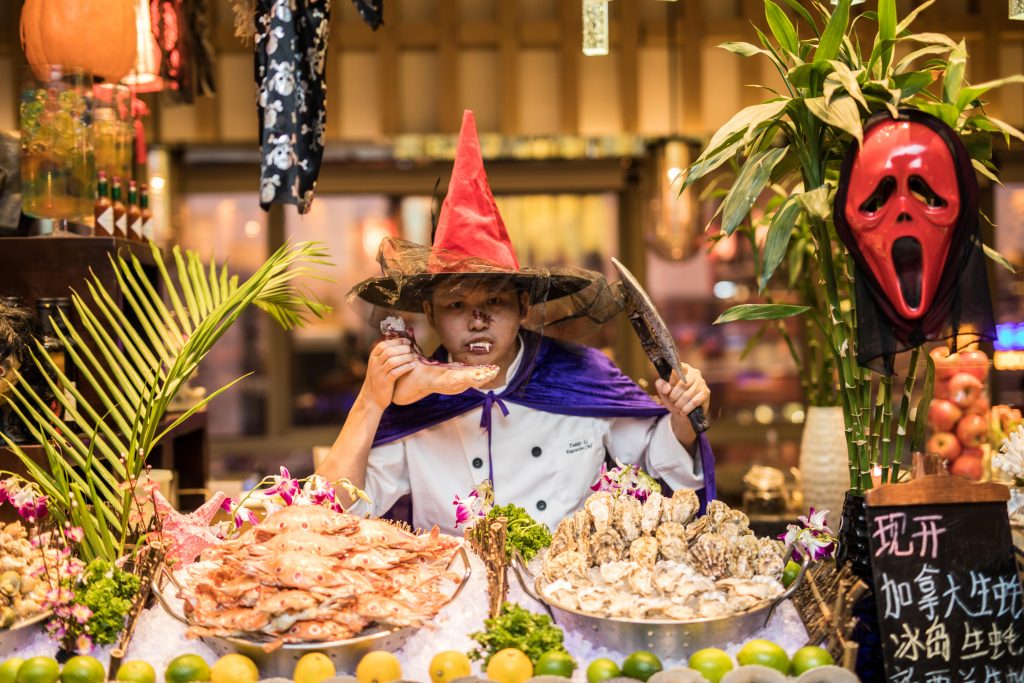 At the opposite side of the restaurant, a wide variety of Asian and International dishes greeted guests. 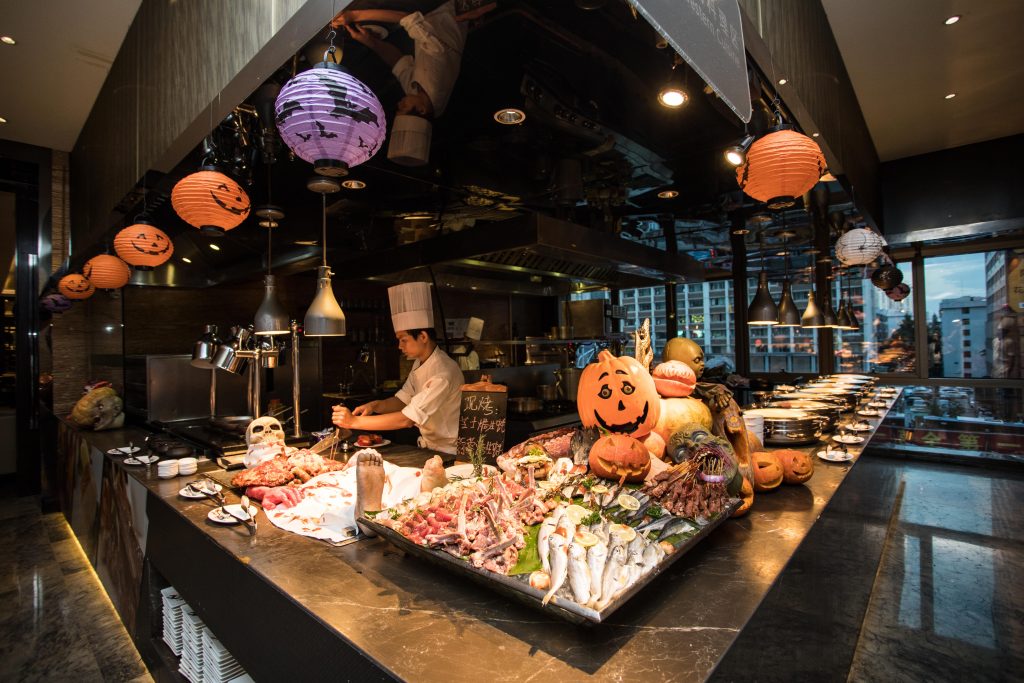 Alongside the usual dishes such as beef brisket, braised noodles with seafood, fried sole fish with cream sauce, Chinese BBQ chicken and pork, and Guangdong-style soup, the food was accentuated by Halloween specials. 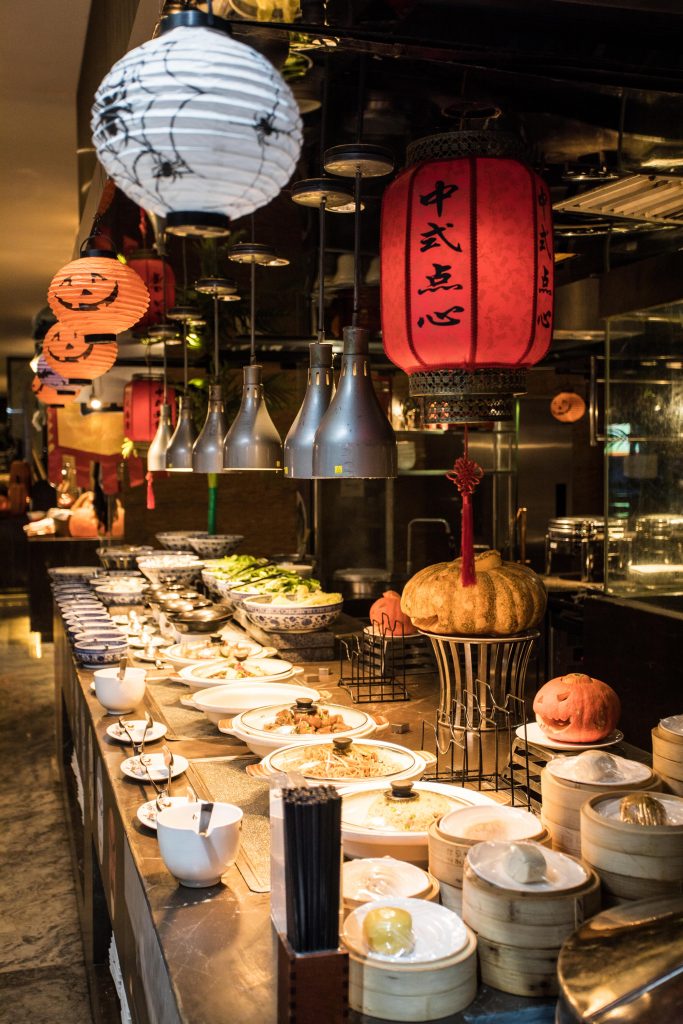 A ‘Terrorist Mummy’ of BBQ pork rib with sausage was the centrepiece, complete with ketchup blood, laid ready and waiting to feed hungry guests. 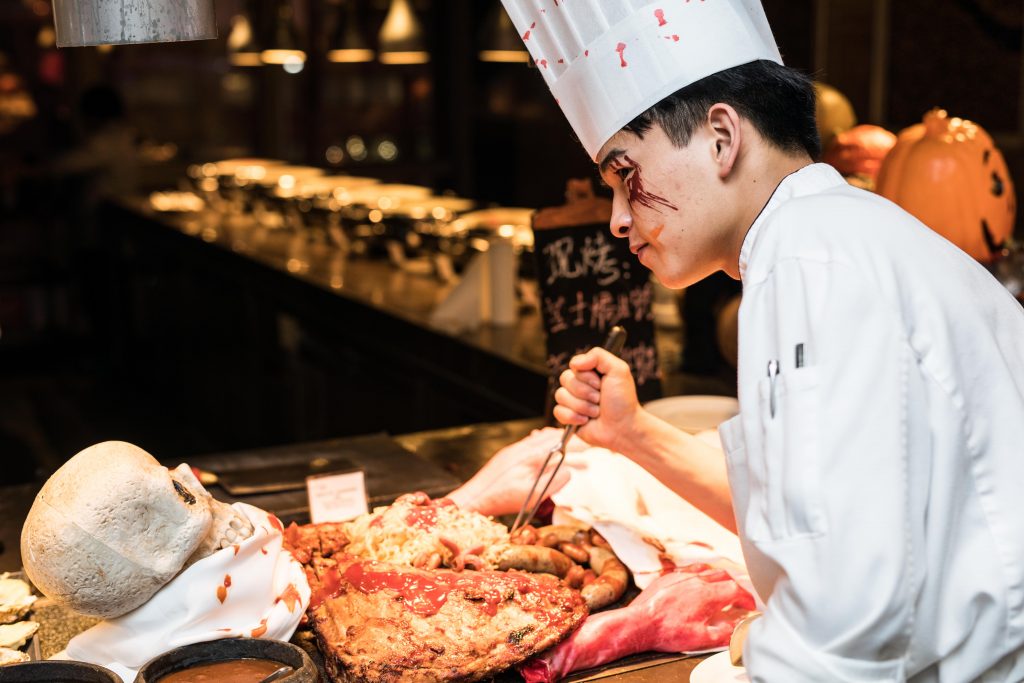 The pièce de résistance of the whole experience was – without a doubt – the desserts. This is where the Halloween theme really came alive – or undead! A human brain, a bleeding heart and a dismembered arm were proudly displayed, surrounded by tombstones, spiders and skulls. 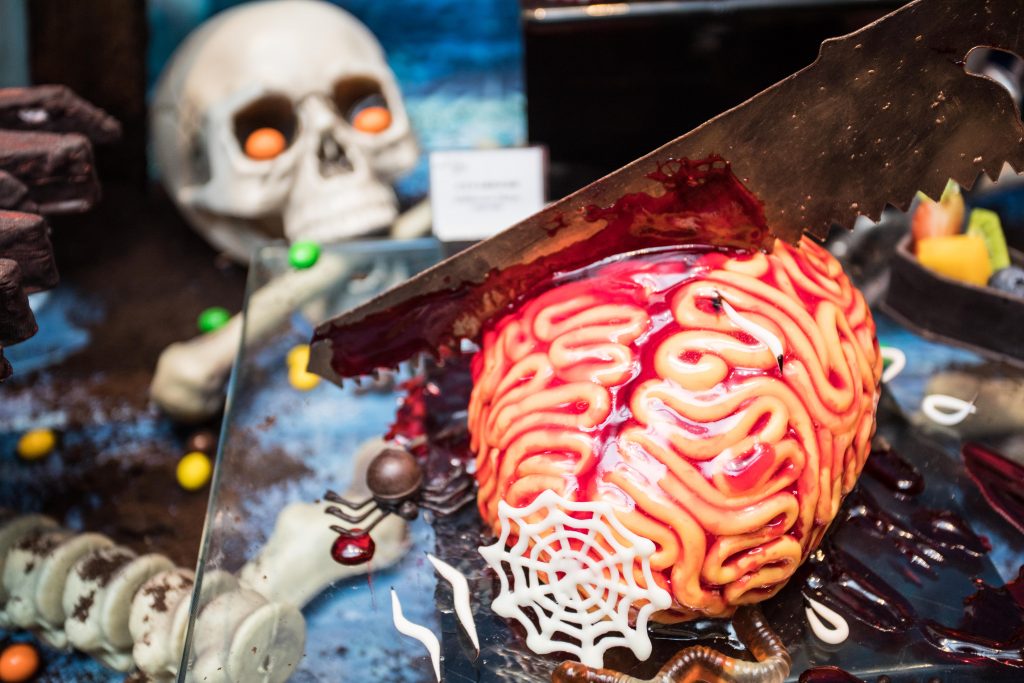 Luckily they were filled with delightful flavours like chocolate cake with raspberry and cream filling, almond cake or Swiss roll. They looked so good people were almost afraid to eat them! 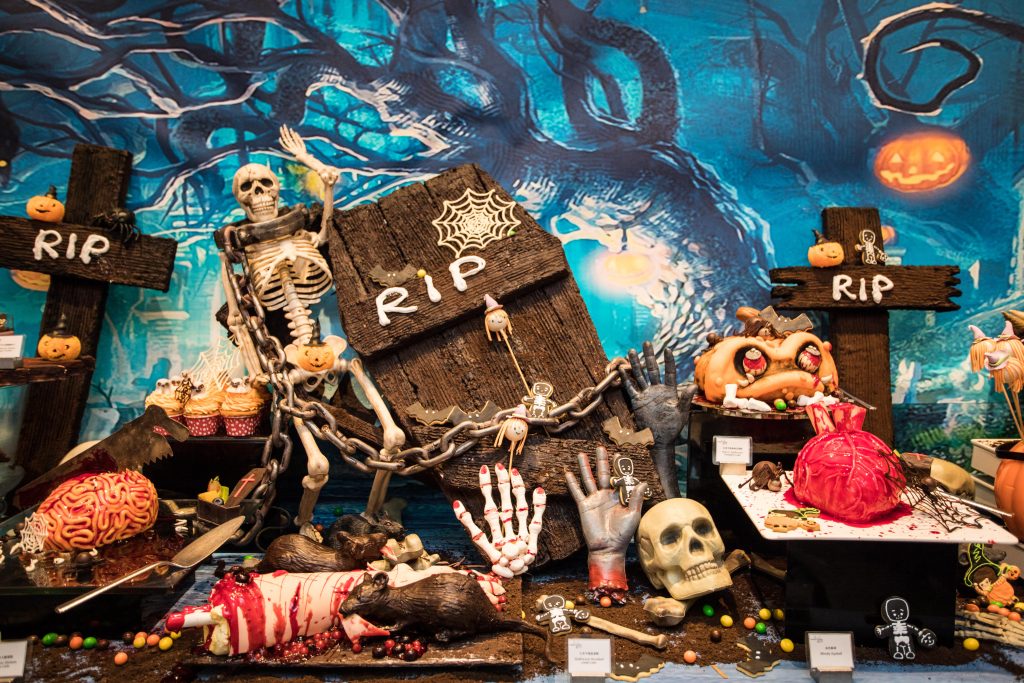 As well as these masterpieces there were over 30 different types of dessert, all designed and made by the bakery chef. 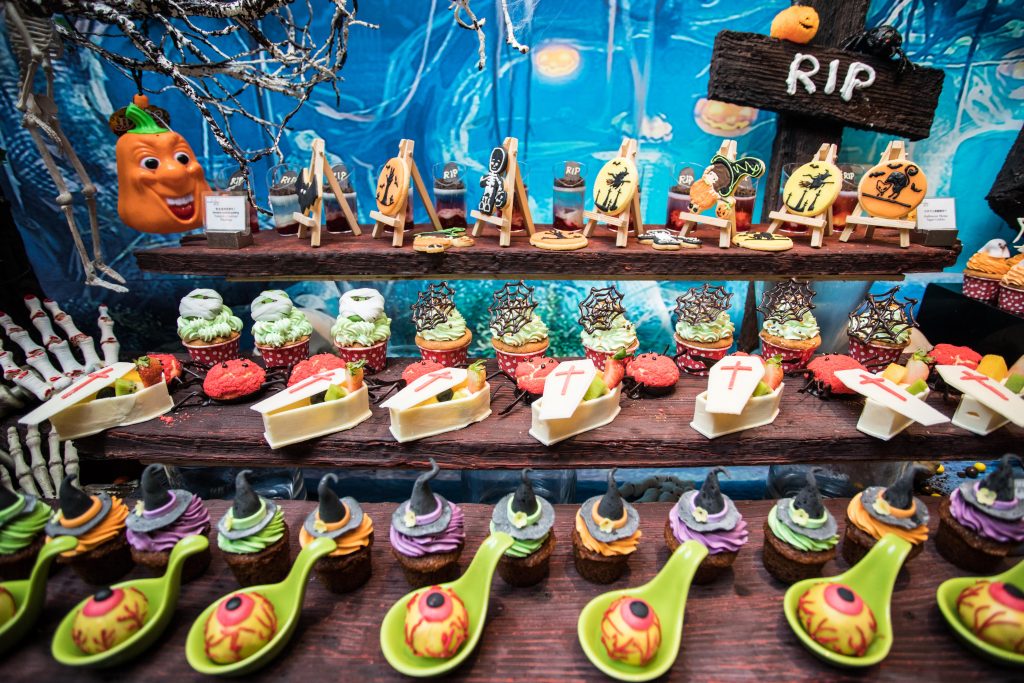 The treats didn’t stop at food either. Free-flow soft drinks and beer were also included with the buffet, along with a complimentary glass of wine and exclusive Halloween mocktails. 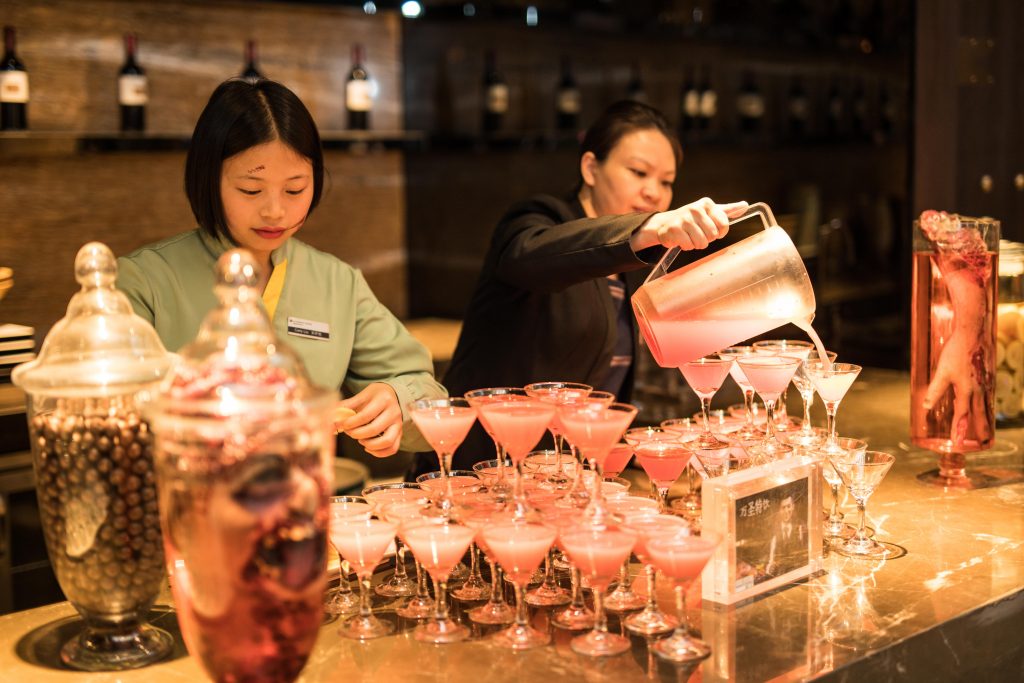 Free face paint, stick on scars and wounds, hats and masks were provided for anyone who wanted to embrace their inner scariness. 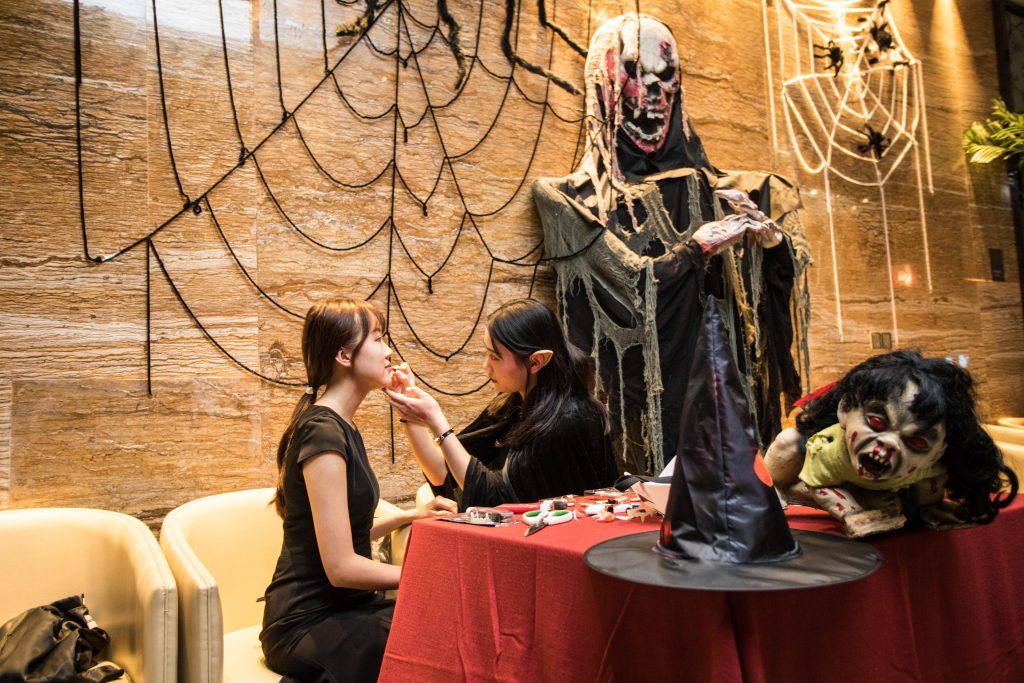 To top off a spectacular evening, what Halloween celebration would be complete without a pumpkin carving competition! 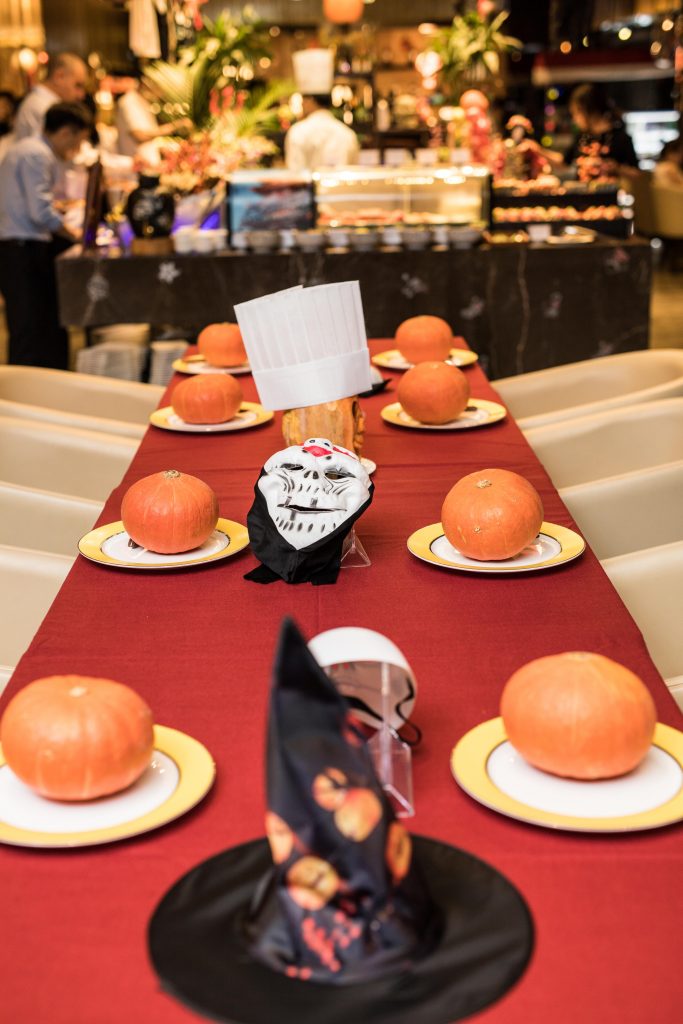 Eight guests took their places in front of fresh pumpkins, ready and waiting for life to be carving into them. Two children joined in, although after a while it became clear that their parents were doing most of the work as the children decided to go elsewhere and play! 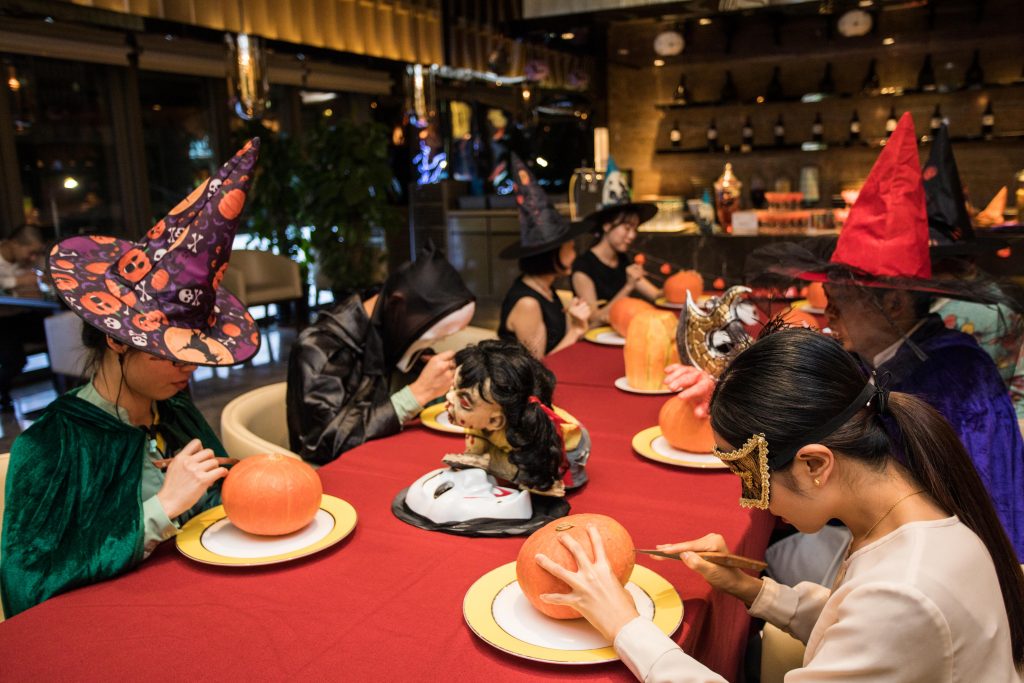 After intense concentration and hard work from the participants, the restaurant manager chose a winning pumpkin. All pumpkin carvers received a Wyndham Grand mug as a special gift and the winner also received an exclusive bottle of house wine. The decision was very difficult to make as a lot of thought and effort had gone into every Jack o’lantern. 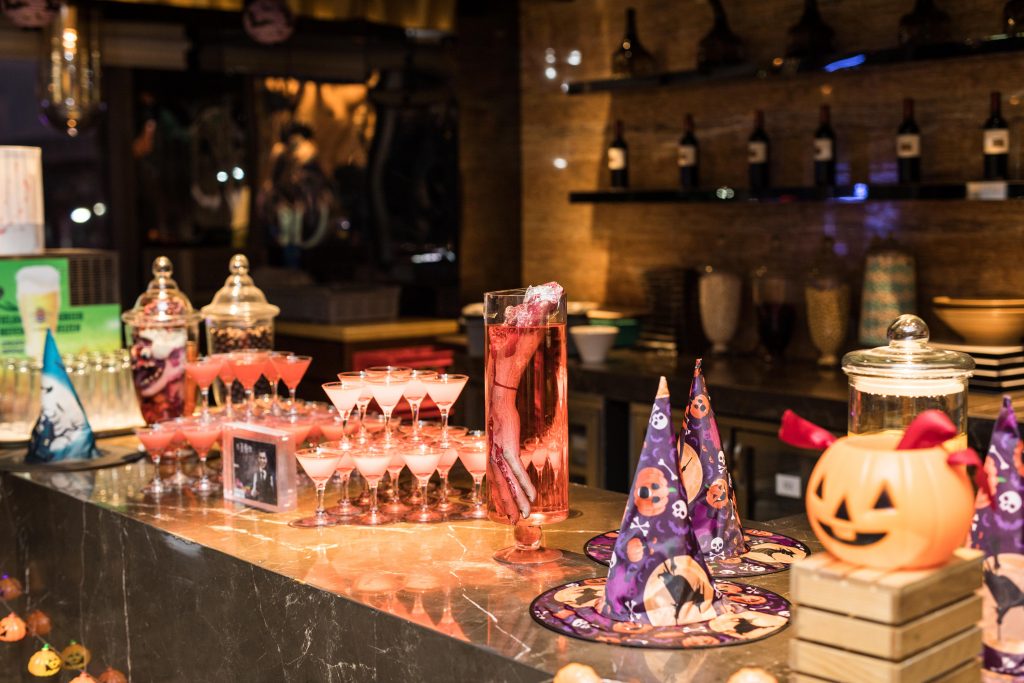 This was the third consecutive year the Grand Kitchen has put on a special Halloween Buffet and Mask Party, ever since the Wyndham Grand opened in 2015. If you can’t wait until next October, the international seafood buffet is also available every day for lunch and dinner! 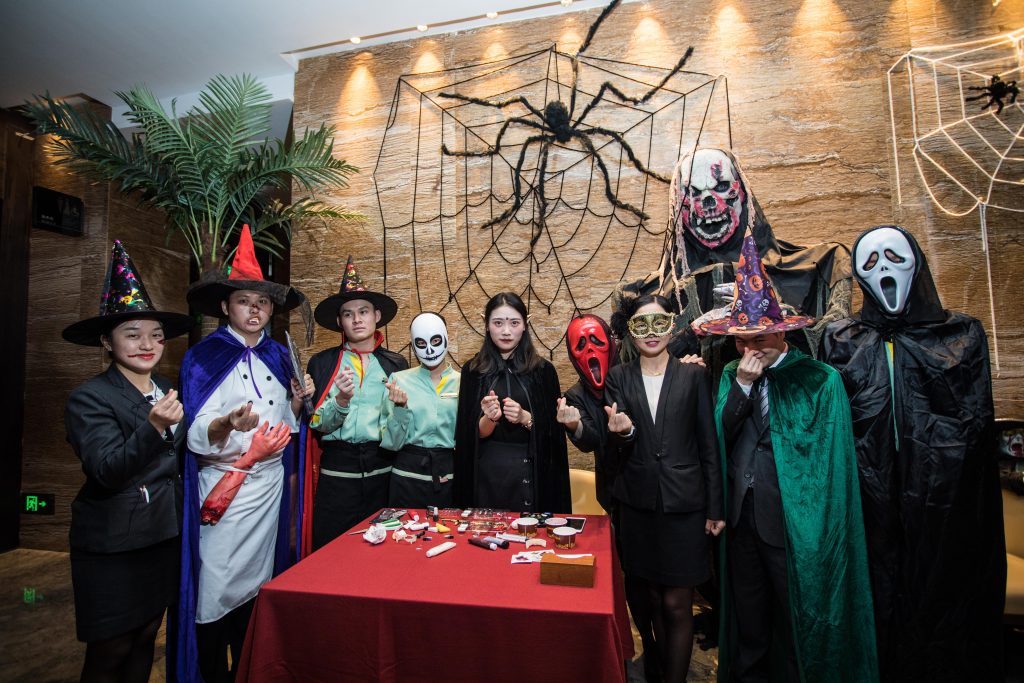 From Monday to Thursday the buffet is RMB268, and RMB318 between Friday and Sunday. All diners are also welcome to enjoy one complimentary glass of wine. Prices are subject to 10% service charge and 6% VAT.