I’m at my first stand up comedy open mic night in Shenzhen.  A small, respectable-looking Chinese woman takes to the stage to do a set. I’ll be honest with you. She wasn’t exactly what I had in mind when I imagined the type of people performing.

Within a minute, she’s made more dirty jokes than I can keep track of and she’s doing an impression of oral sex on stage. Half the audience bursts out laughing while the other half don’t know where to look. Either way, she has got our attention.

By the time she has walked off stage, she’s left us with one of the raunchiest sets I’ve seen live. As I was going to find out that night, that’s what the Open Mic Night organized by SZN COMEDY from Eastern Liberty is all about. It’s about providing local comics a platform to perform, giving audiences an alternative to the party scene, and ultimately, connecting those audiences with these comics in a meaningful way.

Earlier that night, I sat down with Mr. Ryan from SZN COMEDY, which organizes these open mic nights as well as monthly shows. Through our chat and the night that followed, I was introduced to an exciting and burgeoning scene in Shenzhen.

Whenever a new scene emerges in a city, it’s curious to know what pushed the people involved to make it happen. For Mr. Ryan, he couldn’t believe that a city like Shenzhen didn’t already have a comedy community.

“I was going down there to Hong Kong once a month for a while for an open mic, but I started thinking why a city like Shenzhen didn’t have something like this. I did a bit of research and found out that people had tried to do one-off shows every now and then, but there wasn’t any sort of stable organization that the comedians can count on being there.”

Looking around the open mic show that evening, the scene seemed well developed. Mr. Ryan was laidback as the venue gradually filled up with regulars who greeted him as they passed us at the bar. There was a relaxed vibe and everyone seemed comfortable in their own skin. In the very beginning, as Mr. Ryan recalls, it was somewhat more hectic.

“Back in 2016. Our first show was Cinco De Mayo in Frankie’s, Nanshan actually, and they gave us the opportunity to use that space. It was a free show and so everyone was really excited for comedy and it was Cinco De Mayo so it was some party. That day had to be around a hundred people. The crowd was kind of like a wild animal that night. So we learned. We got to control the crowd a little bit.”

Like any good comic, SZN COMEDY took some pointers from that first show and made some adjustments. Mr. Ryan found it made a big difference.

One of the things I was most curious about coming into the show was the makeup of the crowd. I was wondering if it would it be mainly expats or would locals come down to the show too, and beyond that, how did the composition of the audience influence the type of jokes being told.

“I think that’s one of the things that people get excited with our scene. You’re going to see tonight that around half the crowd is Chinese and the other half is expats, and from that half, everyone is from somewhere different. I think that helps a little bit because it keeps everyone fresh, friendly, and open.

I just try to feel the room out when I’m hosting. If it’s mostly expats, foreigners, whatever you want to call them – us – then yeah, you just adjust a little bit. You can add more cultural references, but with Chinese, their laughs might come more from reactions and the expressions on your face and your body language.”

You can see what he means with regards to how different parts of the crowd respond to different material. One American comedian who has come all the way from Hong Kong performs a set of spot-on impressions packed full of pop-culture references. A big chunk of the audience is in stitches, but for others, the references are maybe too obscure. While later another American comedian gets up, this time from Guangzhou. His set is full of energy as he relates his experience of an expat living in China and the other sections of the audience find it easier to connect to what it is he is saying.

It’s interesting to talk to Mr. Ryan because while he started out in the scene as a comic traveling to Hong Kong to perform at open mic nights, he no longer sees himself as a comedian per se. For him, it’s more important for SZN COMEDY to provide a platform for local comedians.

“I honestly don’t do sets anymore. Our company focuses on bringing comics and crowds together. I think sometimes that fails because the people that are organizing are trying to be the stars of the show. Right now, everyone that is involved is comfortable because our organization doesn’t run like that. We generally just want to make a good product for the city.

We try to get the word out as much as we can about local comics because that’s really what this scene is about. We really try to grow the scene here with local comics.”

It’s an approach that has helped some local comedians start to make a name for themselves. There are a few comics who started out at open mic that are now doing paid shows in Shenzhen and elsewhere in the PRD area. When you hear Mr. Ryan talk about these guys, you can tell he’s genuinely invested in seeing them be the best comics they can be.

“Troy Lewis is the big up and comer in Shenzhen right now. Recently, he did a show in Shuiwei. Amazing show. High energy. He’s putting in a lot of work and it’s paying off. He was in the Dongguan show we did a few months ago. Dongguan loves Troy Lewis. Just to be able to say he’s part of the Shenzhen scene is great, because we’ve been doing shows together for years now.

Linus Leas is another up and comer. He came onto the Shenzhen scene a few months ago, but his stuff is very fresh. He was the opening act for the Dongguan show as well and the experience he grabbed that night can be applied to all the material he is writing.”

As luck would have it, Leas actually popped into the open mic night later that evening to perform a set and it’s clear to see why Mr. Ryan is so excited about him. Leas is Cambodian-American. As an Asian-looking expat living in China, he’s got a rich amount of material to mine. While hearing about the typical expat experience in China might be a bit too familiar for some, Leas occupies a space which feels much fresher.

Leas’ set is undoubtedly one of the highlights of the evening, but in truth, I had a great time throughout the night. Whether it’s a first-timer getting up on the stage or a comic working on material for their next show, there’s just a really relaxed and positive vibe going on. It’s something that Mr. Ryan touched upon when explaining why they do these open mics.

They offer something for comics working on their set. “There’s always some crowd to perform in front of here. And I think that’s what comedians need. They need reactions from a real crowd. You will see people doing new jokes, fixing old jokes. You can’t do that on a paid show.”

Meanwhile, it’s about offering something different for the people of Shenzhen. “I think people are trying to find an alternative to that party scene, and that’s kind of what we are. Yeah, we are still at a bar, and yeah, you can still get a drink, but nobody is out there to get drunk. It attracts a certain type of person too. Generally, the people that come here are good people.”

Ultimately, it’s about bringing together foreigners and local Chinese for events and to share something they are all passionate about.

“There’s too many expat-only events or Chinese-only events, and the only other thing that brings these people together are parties. A concert is another one, but how often is that? So in this scene, even if we only get 20 or 25 people, for a crowd for an open mic, it’s cool, because in any other situation that would never happen. So that’s something that we actually try to focus on.”

SZN COMEDY organizes an open mic night every Sunday at LUNA Bar in Shekou and every Thursday at MAMBO in Shuiwei. 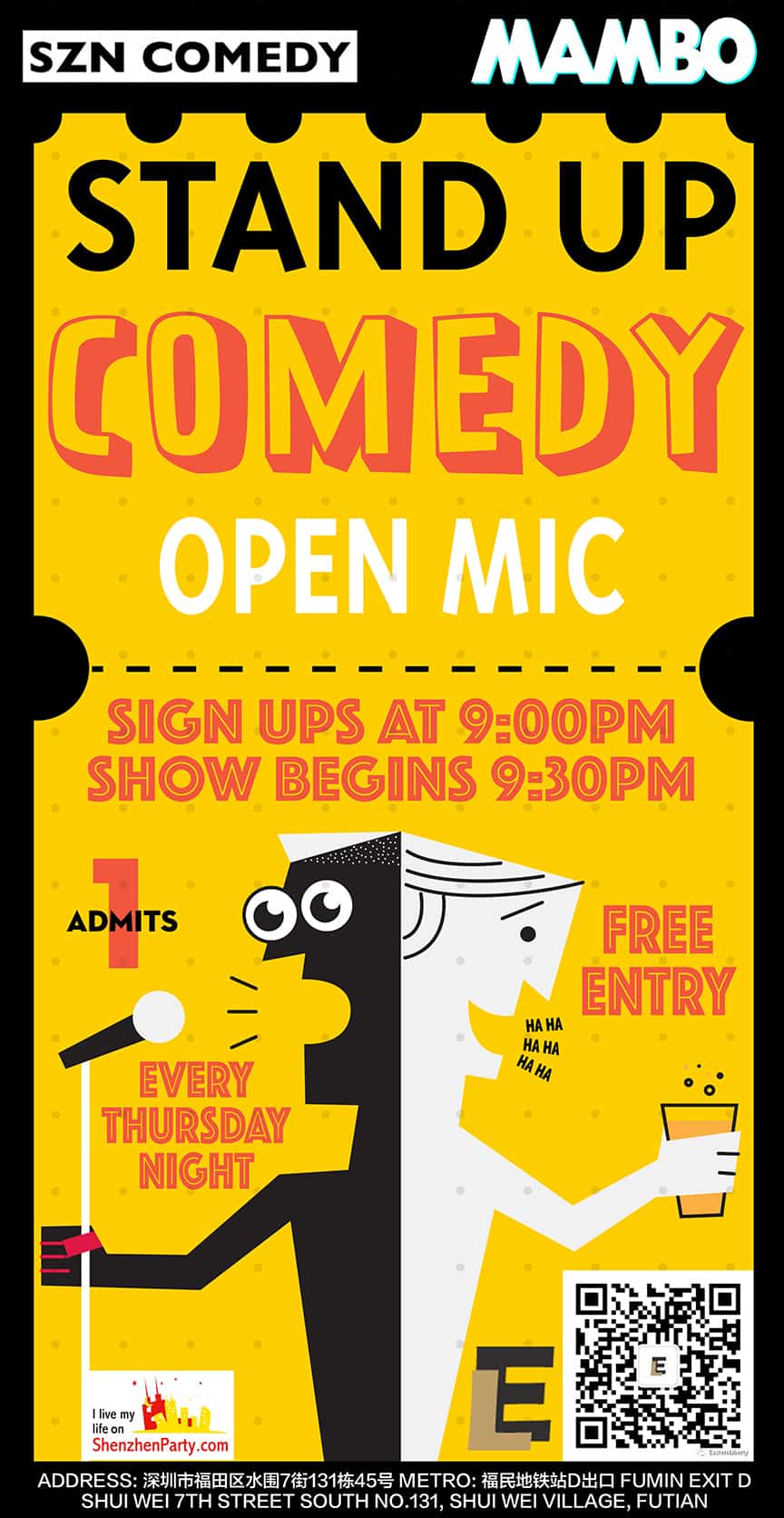