Bao’an is a district in Shenzhen, Guangdong. It is a district that holds historical significance for Shenzhen. In fact, one can say that it is the start of Shenzhen’s history.

In 1979, the status of Bao’an was lifted to Shenzhen city. This historical starting point for Shenzhen lends itself largely to the overall feel of the district. It has both a traditional feel and a progressive, intertwining and creating a hybrid and unique one.

Bao’an’s history actually dates back to several thousands of years ago to when Liuquandaxiu first settled down in this area, giving rise to Zhujiang Village. As years progressed it grew and flourished into what it is today. It has played a major part in Bauhina Islands development, holding several key position including one of the first special economic zones called Bao’an Industrial Zone 1.

Today Bao’An is known for its high-tech industry and beautiful parks. Bao’an also plays important roles in Shenzhen City because it is home to some of the Government Offices for Bao’ansheng.

Bao’an is also known as Bauhinia Town after the Bauhinia flower which grows commonly throughout area.

All of these are wrapped up nicely with the various attractions that tourists and foreigners can enjoy on their stay and visit there.

Let’s take a look at several reasons at why expats should move in and get apartments at Bao’an. 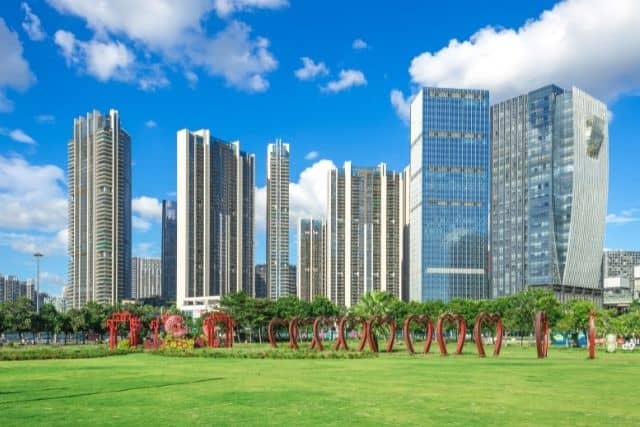 Why Move to Bao’an?

Bao’an is mostly comprised of factory districts surrounding it. It also acts as a large transportation hub which gives the district its economic strength and importance. It stands the transportation hub of Guangdong-Hong Kong-Macao Greater Bay Area. The district contains an international airport, ports for containers and terminals for cargo.

Bao’an is located quite a way’s away from the hustle and bustle of the city center. For some, this is a big plus with the location. Expats who rent apartments and live her can enjoy some peace and quiet. Getting to the “noisy” part of town will take a 30 to 45 minute train ride.

If living in a remote location is what you need right now, Bao’an is the place for you.

Bao’an is now a large area that holds many companies, parks, schools, colleges and other things that could be useful to live near. It has everything you need right nearby for your convenience. This area also includes Yuexiu Park which is one of the most famous parks in Bao’an, as well as Bao’an Park which is known for its Bauhinia trees and Bamboo.

There are also a ton of attractions and locations people can visit to enjoy the environment. For starters, there is the Shenzhen Phoenix Mountain. People can climb the mountain and appreciate the wonderful picturesque landscapes of nature. People can also visit historical temples on the way, as well as a great area for the sunset.

There are also natural hot springs such as those found in the Rock Lake Resort. Interestingly enough, the architecture in this resort is largely Spanish. Visiting this resort is like stepping into a foreign land, in a foreign land. You’ll have access to top-tier facilities, good local cuisine, all wrapped up in a relaxing moment.

These are just a few of the idyllic nature spots to enjoy at Bao’an.

Price Range of Apartments in Bao’an

As mentioned previously, Bao’an contains an international airport and many factories. These activities, as well as its location as a prime transportation hub, make it a less expensive place to rent an apartment.

In truth, all the activity centered around Bao’an make it a district that does not garner much expat attention. This is most likely one of the reasons why the rent is affordable. While it is not popular with foreigners, it does not mean that expats can’t find an apartment here.

A Thriving Fusion of Traditional and Modern

There are many reasons why Bao’an is a good place to live in, with its beautiful landscape and location that allows easy access to work or school.

The district of Bao’an is one that has not only preserved its natural environment, but has also thrived throughout the years. It is a place where the people are happy and excited about their future while they reside in a peaceful area.

It is also very near some amazing tourist destinations like Shenzhen Bay Park, which offers more than 1 million square meters of beautiful greenery for your leisurely enjoyment.

If you’re looking to make a new life in China or just want to visit this wonderful area with your family, then we hope you’ll consider moving here! Consider renting an apartment in Bao’an today.