When it comes to tech innovation in China, Shenzhen is arguably at the center of what is happening in the country. From giants like Tencent in Nanshan and Huawei in Longgang to names like DJI and Baidu, some of China’s leading companies can be found in our city.

Yet, the innovation doesn’t stop there. All around Shenzhen you can find companies making great leaps in product development and leading the way in their markets.

One such company is Kaiyan Medical. Led by CEO Alain Dijkstra, the company specializes in contract manufacturing of light therapy products such as LED facial masks, teeth whitening, and hair re-growth products. By offering their clients a one-stop solution, they have positioned themselves strongly in a market that is expanding rapidly.

Although they have already been operating for 13 years, when you meet the staff, you get the impression that Kaiyan is a much younger company. The staff talks passionately about their work and their eyes light up when they speak about the plans for the future. Kaiyan may already be 13 years old, but there is a palpable sense that the best is yet to come.

Kaiyan is far from what you might picture when you imagine a manufacturing company in China. Although located in the industrial area of Bao’an, the office atmosphere more closely resembles that of a tech company or a startup.

The office space is wide open with only transparent glass separating the CEO from any other staff member. The hallways are lined with lush green plants and the meeting rooms are decorated with flowers. The staff are smiling and seem relaxed. Locals and foreigners work side by side and a mixture of Chinese and English can be heard spoken. To help everyone unwind there is a pool table and a PlayStation with VR. Strolling through the office are two friendly poodles, which belong to the CEO and have become like the office pets.

The company has come a long way in 13 years. Founded by Alain Dijkstra and his wife Letje Yuan, together they have helped build this company to where it is today. They both reflect fondly on the memories they have. 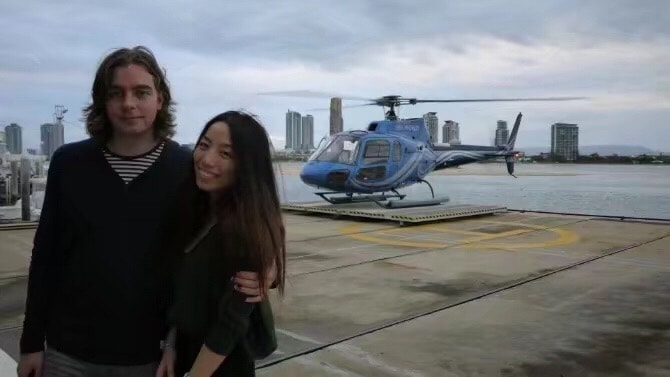 “I came to China at the age of 13,” explains Alain as he starts to tell his story, “Somehow, I started selling computer mouse using my allowance. At the age of 14, I was selling my first containers from China. At that time, there was no Alibaba so it was very easy to flip containers and make a margin of 100 or 200%. My first deal was selling a computer mouse. I bought it for $2 and sold it for $20, at a quantity of 500.”

It wasn’t until Alain met Letje that he began the business that would later become Kaiyan. For Letje too, it was a brave move to make.

“At that time, I had just finished studying opera singing at university in Sichuan. I met Alain and together we said, “Okay, let’s try to do this business together”. It was not my profession. I had to study a lot to learn more about business. But at that time, there were no teeth whitening products available and I saw this product had a future.”

Kaiyan now employees over 200 people, but back in those early days, it was a much smaller operation. “I was the first teeth whitening manufacturer in China. But in fact, it was just me myself making it and trying to sell one,” said Alain with a smile. It was not long before the team began to grow.

“In the very beginning, we only had four people in a small office in Huaqiang Bay. Alain was focused on doing the sales while I worked on purchasing, production, shipping, accounting, exhibiting, design, everything,” added Letje.

Letje still remembers that first order and from there they have not looked back. “It took us one year to get our first customer. They gave us a big order so were able to move to a larger building. It was around 400 square meters and we had 7 people. Another year later, we moved again to Bao’an where we had 30 people.”

They remained at that factory for 4 years before switching to the current location. It was during this time that Kaiyan switched their focus from teeth whitening products to light therapy products. At which point, the company started to grow even faster.

“We have been here for 5 years. In the beginning, we had 70 people and now we have more than 200,” reflects Letje.

Today, Kaiyan is a modern company with an innovative work environment. It’s a work culture that has seen Kaiyan win recognition and awards from companies such as Alibaba.

“We entered an annual competition held by Alibaba to find innovative companies. We have a factory that is 200 people, but we have almost no salespeople. We always get asked how is it possible to have no salespeople, but have such a big factory. Normally, it’s the other way round. Our approach is to somehow turn our customers into our salespeople. We support them with everything they need and they take your ideas and thoughts and they claim sales for you.”

In fact, James Knight, Kaiyan’s Sales Director, was actually a customer before he joined the company.

James explained how that came to be. “I had a company in the UK. I use to do teeth whitening products and buy from Alain. So oddly enough I was their customer first. Alain asked me to join and handle his sales. I’ve been here for 6 years now.”

James believes that one of Kaiyan’s major selling points is that, unlike most of their competitors, they can do everything in-house. “We do a lot of things in-house, which most of our competitors – specifically our Chinese competitors – wouldn’t do. Take design, for example, we have our  concept designer, he can take it and walk to sales and he can say, ‘I think the customer would prefer it a bit different like this.’ And then he can also go to engineering and say, ‘How’s it going with this? Do you think it’s a good idea?’”

The departments are able to interact so well because of the work environment that has been cultivated. The staff is encouraged to have ideas and management is no barrier to those ideas being heard. James believes that is integral to a company that thrives on innovation and forms part of what makes Kaiyan so successful.

“It comes down to hierarchy, doesn’t it? At this company, everything is quite flat. So if anyone in the company, such as the cleaning lady or the receptionist, if they have an idea, they are more than welcome to escalate that up to engineering or top management.”

“I think when you are an innovative company and you are a contract manufacturer that works on development, the best idea always wins. So it’s not always about politics or hierarchy. It’s the best idea that wins.”

All in all, it helps create an open and positive environment that the staff really enjoys. Lisa Zhang, from HR, considers it to be a unique work culture.

“I personally like the company culture and working atmosphere. It’s not like everyone is a robot. We have quite a relaxed working vibe. We hold a lot of events too. The latest is for the World Cup. Everyone predicts the scores and whoever gets the most correct wins a prize.”

“We go out for dinner together. Sometimes we order KFC for everyone or we go to BBQ. We have been to the beach and to KTV. When it is someone’s birthday we arrange some flowers and cake for them.”

Possibly the most interesting perk is located on the roof of the company. An idea Alain had to encourage the staff to be more environmentally-friendly.

“Our company is not a normal Chinese company. We give our staff some space and some air. On the roof, we have a garden where they can grow vegetables. Everybody has their own space to grow whatever they wish,” explains Letje.

Lisa has been with Kaiyan for 7 years so far. An important factor in staying for so long is that she feels that she is able to grow with the company. And it’s a company that is growing at a fast rate. In particular, in the LED facial mask market.

In recent years, James has seen the perception of the product change and the positive impact it has on people’s lives. “You might be skeptical about light therapy. I was. But there is a lot of clinical evidence out there and over the years we’ve got more and more business. We’ve talked to our customers and they all swear by it. There are people with chronic pain and they are using our products and its helping. It’s really nice to be able to say you are helping people.”

As Alain explains, recent developments in the American and European markets promise an even brighter future for Kaiyan. “Our products are now being recognized by the FDA and the European ISO. Once you have the FDA audit you are allowed to sell these as medical products and the insurance companies have also taken it on. So, if you have back pain, you can actually pay with your insurance to buy our products.”

The company is not only expanding in Western markets. Letje has plans for the domestic market too. “Next year, I will start to focus on the Chinese market. Right now, we have not realized the potential of the domestic market. We currently only see beauty products, but we should be approved to sell medical products by next year.”

A lot has been achieved so far, but Alain is always working on ways to keep Kaiyan moving forward. James set out his CEO’s ambition. “Alain has a goal. He wants to be the biggest contract manufacturer for light therapy products. He wants to be a mini-Foxconn. So essentially, we want to be the biggest contract light manufacturer, and I actually think we are already. But we are still growing and we are getting a bigger market share.”

As Kaiyan expands, both in terms of size and in scope, there are opportunities for the right kind of person to join Kaiyan and make a difference. With the company constantly growing, there are always roles available across the departments, as James outlines.

“Marketing is always needed. To develop our products further, we need to develop more showcasing. So marketing fits into that. I currently do a large percentage of our company’s sales so salespeople are always welcome.

Fundamentally, what Kaiyan look for in a member of staff is character and integrity. “You should always hire for character. The rest you can teach. What we want to do is to attract good people, honest people, people with a bit of empathy. Being a team player is important. We succeed together as a company.”

Whoever joins Kaiyan in the future, will find themselves entering company that combines the very best of European and Chinese working culture. It’s a place that staff are given space and trusted to do their work and where ideas are chosen, not on who proposed them, but on their merits. At Kaiyan, the staff has the opportunity to learn a whole host of skills and grow with the company as it goes from strength to strength.