The New Year celebrations are always an exciting time at Green Oasis School but this year it was especially true after staff and students were treated to a Song and Dance extravaganza by staff and students.  Led by Ms Sophie(Music) and Ms. Helen (Dance) three months of practice culminated in a colourful display enjoyed by the whole school community.  It was an incredible day that amazed the huge numbers of parents and friends who had joined us for the day’s festivities. 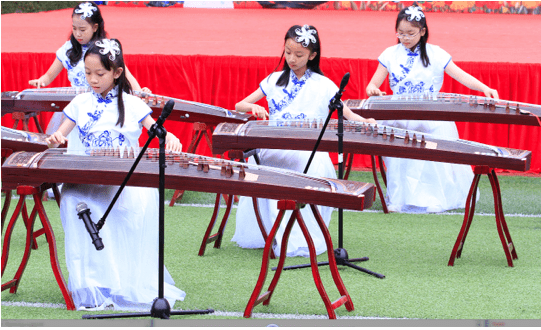 Beginning with the combined Primary and Secondary Guzheng players, a song form Year 1 and a solo from Ms Sophie, the music proved to be the warm-up as we moved into the Dance.  Dances from nine different regions were performed by Secondary and Primary Students.  The Dance section opened with performance form the Yi.  With swirling skirts and athletic moves, Year 8 students filled the stage with colour and drama. 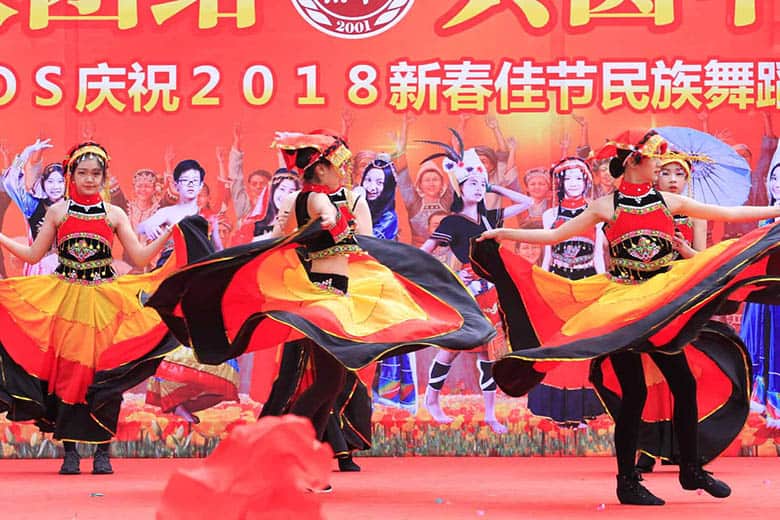 Boys who are normally seen on the football pitch or basketball court s used their athleticism to make huge leaps that drew gasps of amazement from the watching students. 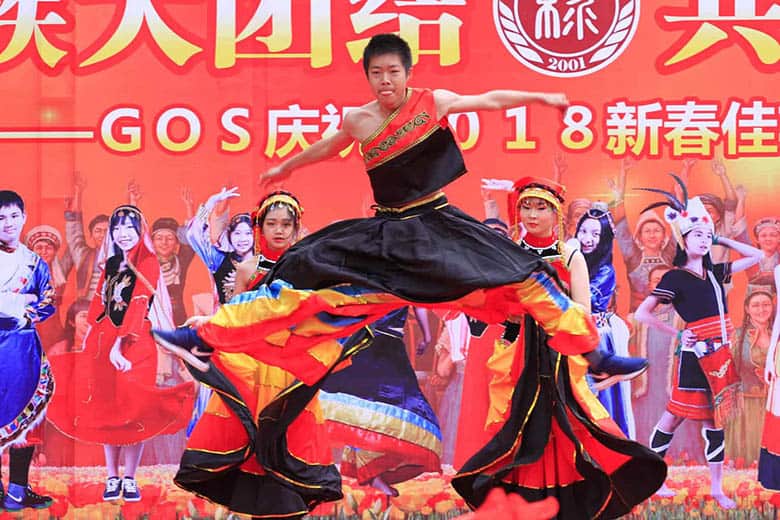 The Choa Xian dance was performed next by the Principal bringing a sense of calm after the frenetic activity of the Year 8 performers. Once we had gathered our breath, the students were back, this time with an Uyghur dance featuring a lot of dramatic arm gestures, creating great shape and adding meaning to the moves. The gracefulness of the Year 10 students added to the beauty of the performance. 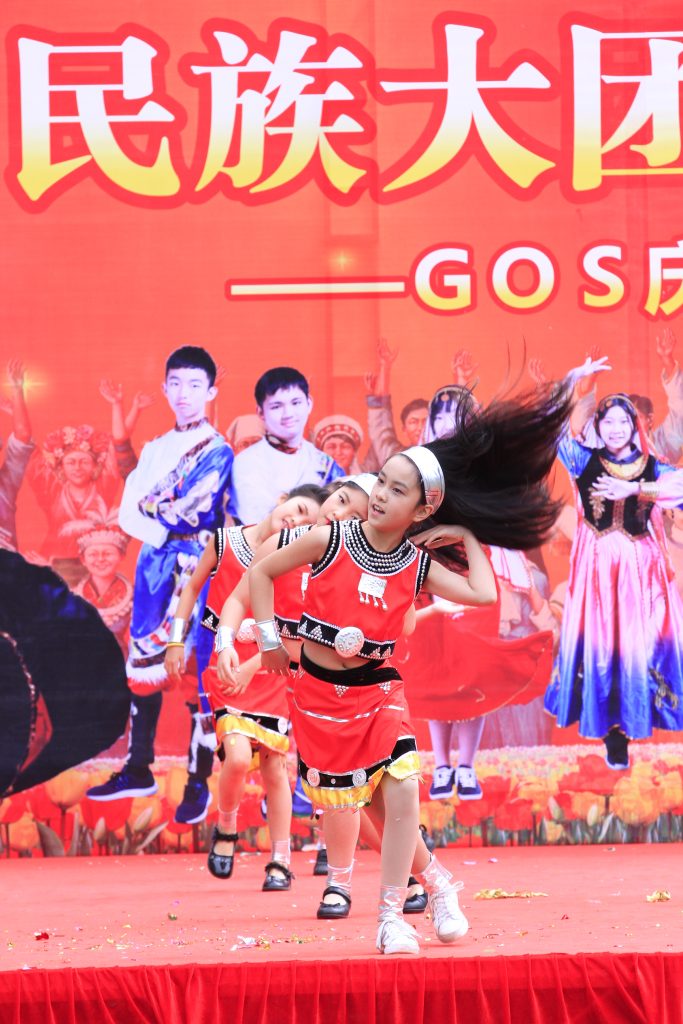 Year 7’s interpretive play from the Gaoshan told the story of a child leaving to go and live in the big city before returning to her hometown to discover that nothing is more important than family.  This struck a chord with many staff and parents as we were reminded of the meaning of the Spring Festival.

The Li, Yao and Zhuang dances that followed brought energy back into the show after our moment of reflection.  The precision of the bamboo dances had many holding their breath watching to see if the student would avoid being hit by the poles.  All escaped injury but there was a lot of feverish counting to make sure.  Again, the athleticism of the students was on show as they leaped and stepped between the poles and turned cartwheels across the stage. 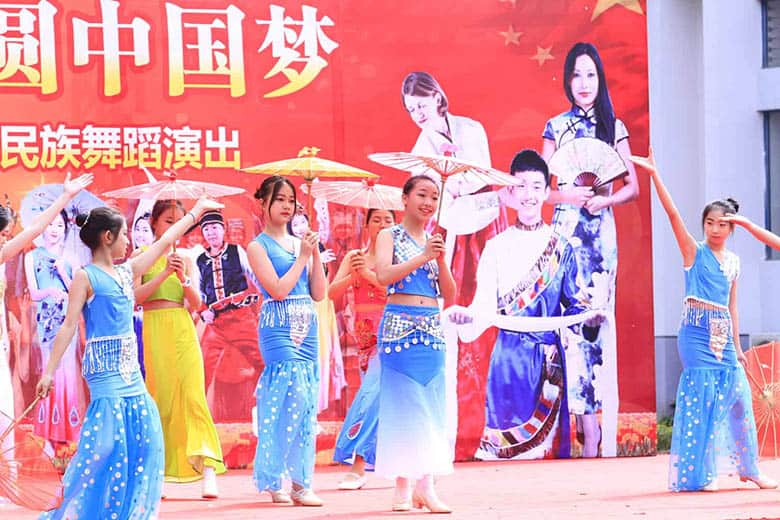 Our youngest dancers then performed a hair swinging dance from the Wa.  This was dizzying at times as the students flung their hair up and down and round and round while adding graceful movements to move around the stage.  Special thanks go to the Secondary Chinese department for working with the Primary students to create a spectacular that caused many a head to ache simply watching the strength of the girls performing.

The graceful Dai dance from our Year 7 students permitted another moment of reflection as the students moved around the stage with umbrellas.  Bright and colourful, it presaged the final dance of the show. 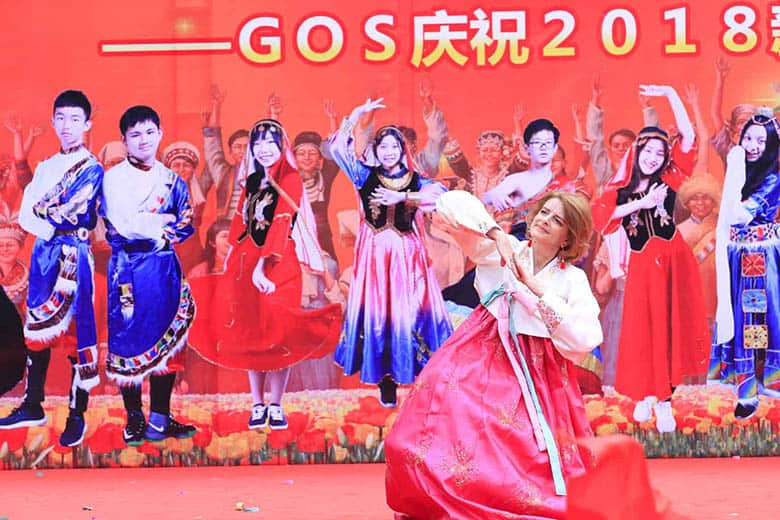 The Zang dance “The pure Hada”  completed he performances with a twirling dance and athletic moves.  The girls’ took the stage first creating the mood of the dance with thoughtful expressions and moves that took them from the stage to the field.  The entrance of the boys with their powerful jumps and twirls added energy to the dance.  Once again our basketball-loving boys showed that power can also be graceful.

The event ended with a display of Cheongsam and Qipao by the teachers who were greeted to much acclaim by their hardworking students. 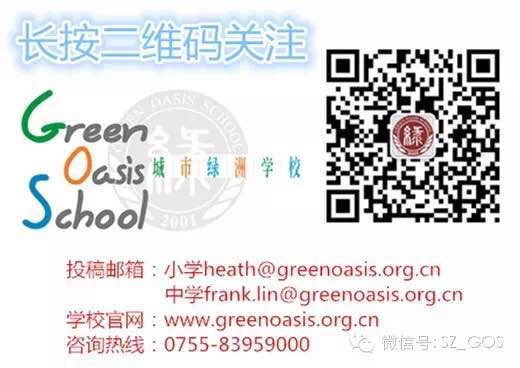