Longhua is the third biggest district in Shenzhen, known for its industrial enterprises, high-tech companies, and beautiful architecture. While Futian is the business center of Shenzhen, Longhua actually acts as the central geographical district.

This ideal positioning makes it a hub and passageway to the many different districts in Shenzhen.

Before Longhua was developed into what it is today, it began as one of the first Hakka settlements outside Fujian province. It then became a market town that opened up during the Qing dynasty.

Longhua has always had an important role in China’s history because of its close proximity to Hong Kong, making it easy to import goods from overseas.

The West Railway station was built in 1910 and helped transport cargo from Xiamen and Shantou to Guangzhou. In 1950, when China’s communist government ruled China, they allowed Longhua to expand into a small village.

In 1984, Longhua Village became a township and now has six residential areas with over 480,000 people residing there.

Today, Apartments in Longhua are still attracting people from all over the world because of its convenient location as well as the economic opportunities available to foreigners who settle down here.

Let’s take a deeper look as to why Lohuan is a great place for expats to move to and rent apartments in. 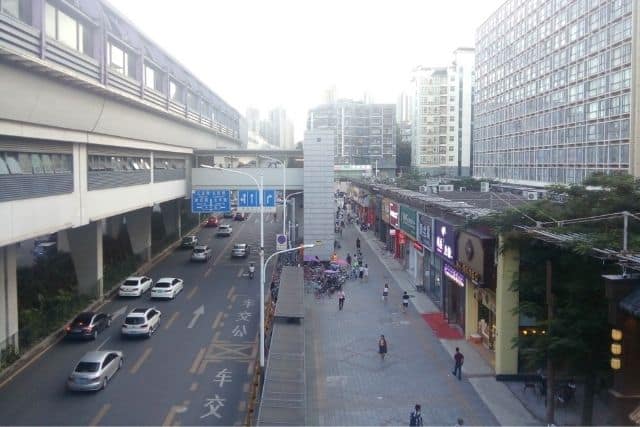 Why Move to Longhua District?

As stated previously, Longhua taking its place at the geographical center of Shenzhen is very ideal. It stands as a gateway to all the other districts in Shenzhen, making it easy to go around and travel for whatever purpose you have. It is adjacent to six districts within Shenzhen. Expats who live here can travel to various districts and even Hong Kong with ease.

Longhua is only half an hour away from Shenzhen Baoan International Airport via expressway and can be reached within 3 hours by car from Guangzhou. It’s also only one stop away from Window of The World and Wutong Ferry Terminal.

Furthermore, the Shenzhen North Railway Station is also located in Longhua. It is a modern train station that houses bullet trains and subways, with regular train lines also being present and used.

All these trains can help travelers reach far away locations conveniently such as Beijing, Hong Kong, and Wuhan just to name a few.

As one of the first factories that popped up in China, Chinese people have grown to love the products made in Longhua. There are over 1,500 industrial enterprises in the district, as well as over 2,500 high-tech enterprises operating this day. These numbers are likely to grow as the years move forward.

All of these enterprises have cultivated a reputation of being the core for artificial intelligence, 5G technologies, electronics, semiconductors, and so much more. Many companies have found their home in Longhua. They include Foxconn, Meituan Technology, and Shenzhen Liande Automatic Equipment Co. Ltd.

Apart from these, it is known for its shoe manufacturing, pharmaceutical production, IT/electronics industry, and toy making just to name a few. It is a hub for various industrial chains.

The history of Taiwanese companies moving their factories into Shenzhen has made this district quite popular amongst expats who are looking for Apartments in Longhua to rent or buy homes. All these factors help attract many foreigners who are interested in setting up businesses here.

Every May, people can visit the Guanlan Printmaking Village for an annual printmaking fair. It stands as one of the most important cultural activities in Shenzhen. In this fair, painters come to rent buildings and work on their art. Visitors can enjoy the paintings while also purchasing handcrafts and materials to make art for themselves.

The buildings there are made from Hakka architecture, with pools, wells, and ancestral temples to view and appreciate.

Apart from these, people can also visit the Wangye Museum and look on artifacts that have been collected from various dynasties in China’s history.

Longhua is a dynamic district whose place – both at the center of Shenzhen and as an important part of various industrial chains – make it a great place to stay. Staying at Longhua places people closer to forward progress.

For the people staying there, they will find all the amenities that they may need. The city center is downtown with numerous shopping malls such as Yintai Shopping Center and Hualian Plaza Market place which provide many different opportunities for people.

Interestingly enough, despite its location, it is generally seen as more quiet than other districts. The rent is also much lower, with shared apartments coming at 1,200 to 2,000 RMB, and single apartments costing anywhere from 2,000 to 3,500 RMB.

District on the Rise

Longhua is an old industrial district that has undergone rapid gentrification. The transformation from a gritty factory town to one of China’s most sought-after neighborhoods was led by local residents and supported by the government.

It is an upcoming district with a high potential for future development. With the right investments, it will be one of Shanghai’s most prosperous districts in just 2-3 years time.

Expats renting apartments in Longhua will experience the progress of various industries and the ease of travelling to different sectors and cities.