In the time since Les 5 Chef’s opened its doors in Shekou, the fine dining restaurant has built up a reputation for its high quality cuisine at reasonable prices. So when they announced the opening of their new restaurant called Les 5 Chef’s Miznon, naturally it caught the curiosity of many a food lover in the city. Shenzhen Party went to check out the latest culinary endeavor.

At first glance, Les 5 Chef’s Miznon is probably not what most people would have been expecting from the people behind the original Les 5 Chef’s. The interior consists of exposed foundations with bright graffiti and blackboards of food specials. From the Hong Kong style open style bar, hip music plays onto the streets where there are the neighboring hole in the wall restaurants and stores.

The idea for Miznon came about when Harry kept receiving requests from customers at Les 5 Chef’s. “We have a lot of Israeli customers and they came to me many times, ‘Harry, we love your food, but can you do our food.’ I was many times before in Israel and I know how to make their food so I said, ‘Yes, but we will make a completely different concept to the 5 Chef’s.”

“It took time to find the flavor. Israeli taste is very specific so we adapt the food so that everybody likes it. For example, for the Chinese taste, we will give a little bit of spiciness inside, so the customer can order it spicy if they want to have spicy or not.”

In fact, it is from the restaurant’s Israeli origins that the restaurant takes its name Miznon, which means ‘Canteen’ in Hebrew. Although to refer to Miznon simply as a canteen would be to do a disservice to its extensive and exciting food menu.

Customers can choose from twenty four different pitas including meat, seafood, and vegetable fillings. The Roasted Chicken is one of the stand-out items on the menu, which goes well with any of the ten roasted vegetables dishes. That is all without mentioning any of the soups, salads or noodle dishes.

Harry is asked to pick out some of the most popular dishes. “For me, it is the Lamb Chili Onion Pita. We use only the Lamb Tenderloin so it is very soft. The next one is the Falafel Pita, because we have lots of options for vegan people and vegetarians coming here. There is also the Roasted Cauliflower. First it is cooked, then roasted. We use only Greek or Australian olive oil to roast it. It is one of the best sellers.”

While picking the roasted tomatoes straight from the vine and as you try the roasted cauliflower and ask yourself if cauliflower has always tasted this good, one thing starts to become clear; Les 5  Chef’s Miznon uses only the finest, freshest and healthiest ingredients. “Our beef is coming from Australia. Our vegetables we pick up every two days from a farm four hours from here by driving. The hummus, every day we make fresh three times. We peel the chickpeas. It’s a lot of work, but it’s much smoother this way.”

Another element of the concept at Les 5 Chef’s Miznon is the complimentary sauce station, which customers are encouraged to take advantage of. “We have here 8 sauces. We have for European tastes and Chinese tastes. We give the recommendations, but I really have to say that they find their own taste,” explained Harry.

Yet to say Les 5 Chef’s Miznon is somewhere only to come to enjoy a meal would be only part of the story. It’s as much a place to meet friends to chat over some drinks. The restaurant boasts draft craft beer all the way from Ingolstadt, in the heart of Bavaria. Herrnbrau is available in four different beers and cannot be found anywhere else in China, let alone Shenzhen. At RMB20 for 300ml, it’s most likely the best value you will find around too.

The spirits menu is equally generously priced and well stocked. When you can get yourself a rum or gin for RMB25, it’s no wonder then that many customers end up staying at Les 5 Chef’s Miznon long after they have finished their meal. As Harry says, “What we do is we close when the last customer has left. So sometimes we are open till three or four o’clock.”

See below for more information on Les 5 Chef’s Fondue Festival, which runs from 21st December 2017 to 21st January 2018. There are also some fantastic  lunch specials and drinks offers available at Les 5 Chef’s Miznon. 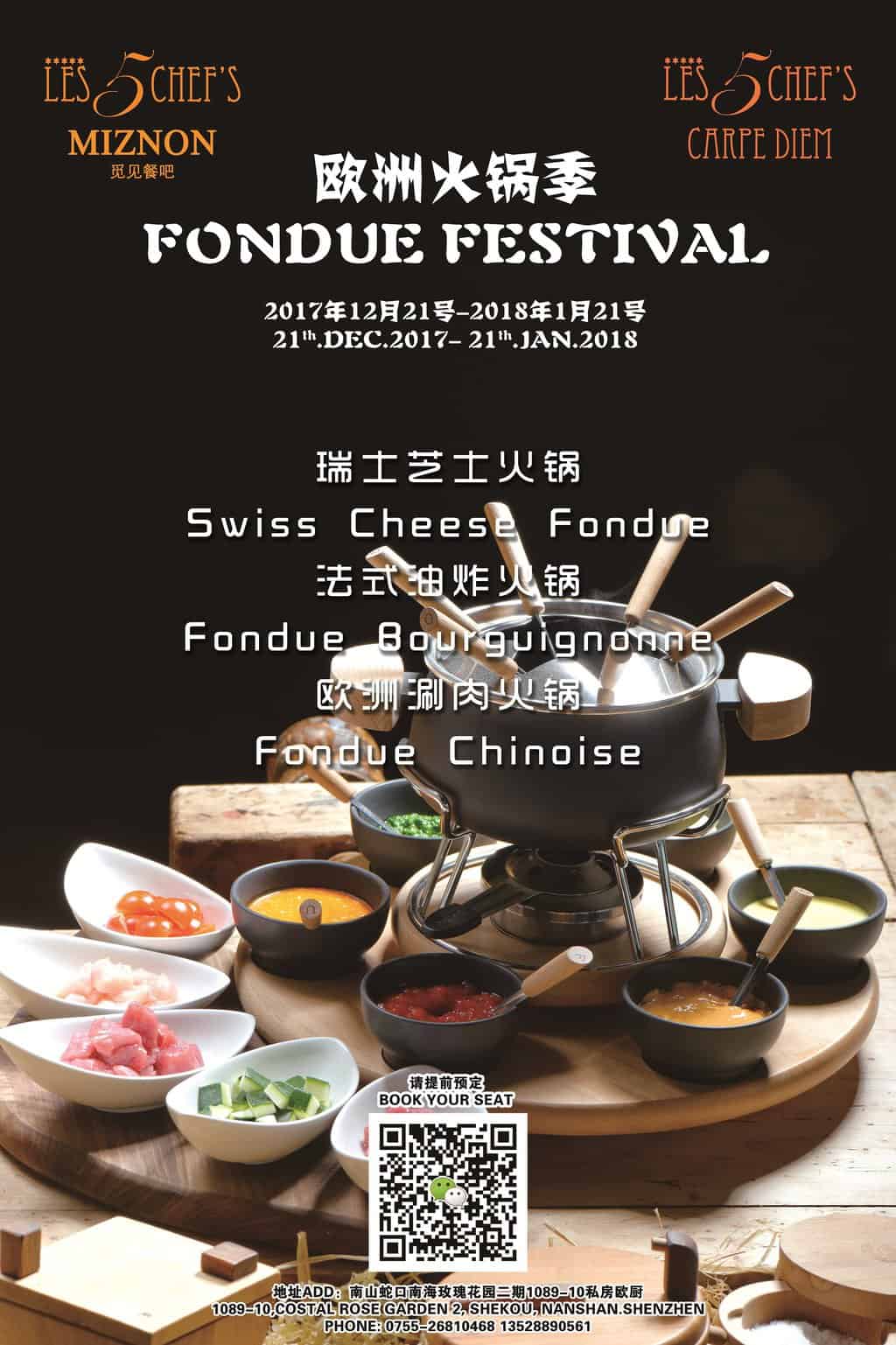