The Yantian District of Shenzhen is a growing area that offers plenty for expats and tourists alike.

It’s located on the eastern coast of China in Guangdong Province, and some people refer to it as “South Bay”. The population of this district has been growing very quickly over the past few years. It occupies the southeastern part of the bay area facing Hong Kong across the Sham Chun River.

Originally, the Yantian district was an agricultural area that grew fruit and vegetables. It became a fishing village in the Ming Dynasty, giving it its name.

Over time, the Yantian district developed to become mostly industrial. After China opened up to foreign companies in 1982, companies began building factories here. This led to more people moving into the area so they could work in these factories. There are also many warehouses located in this district due to its proximity to Hong Kong’s port facilities.

Apart from being close to urban amenities such as an international hospital, shopping malls and wet markets, it is also noted as one of three major industrial parks in Shenzhen which accounts for most employment opportunities.

The early history of Yantian can be traced back to fishing villages that inhabited the area since at least two thousand years ago.

As more people moved into Yantian, there came about a need for housing and commercial space and this accelerated development. Nowadays it has become an established district with apartment complexes ready for rent or sale.

Apartments in Yantian are generally popular with newly arrived expats who find that they can almost immediately stake their claim on a brand new apartment in mere days.

Yantian is home to three major industrial parks in its district, as well as the Yantian Port Container Terminal created with the world’s leading port operator Hutchison-Whampoa.

Here are several reasons why expats move to Yantian and rent apartments there. 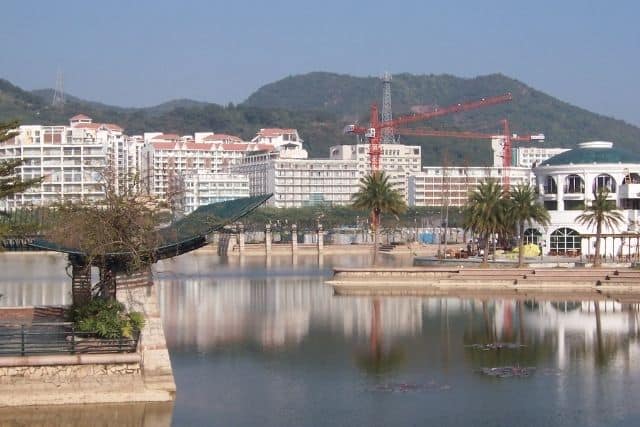 Why Move to Yantian District?

Since the area has so many opportunities to work and live, it attracts people from all different backgrounds. People living in this part of China are employed by companies like Foxconn, Canon, Apple Inc., Lenovo, Huawei, and Tencent just to name a few.

There are also many foreign international schools located here for children whose parents work in or travel to these companies.

The district is well-known throughout China for the number of business opportunities available to job seekers. It’s a very multicultural city with people from all over the country coming together in one place.

This makes it an interesting cultural experience for anyone who wants to go out and explore what it’s like living among so many different kinds of people.

Close to the Beaches

Yantian is close to many beaches. If you want to enjoy the waters on your time off, this is the district to stay in.

The Xiaomeisha Beach is like the Hawaii of the Orient. The quiet and peaceful surroundings and fresh air bring about many tourists to its inviting waters.

Another beach in the area is Dameisha. This beautiful beach is surrounded by three tall mountains. The area includes many spots and attractions for people to visit and enjoy.

Apart from beaches though, there are also water parks that have activities other than swimming. For instance, Xiaomeisha Sea World allows people to see polar bears and other animals, ride jet skis, and enjoy various performances.

Peace and Solitude Away from the City

Yantian is a district that is located quite far from the city. Depending on what expats move for, this may be something sought after or avoided. If expats are coming for work purposes, Yantian may be a bit further from the city than one would like.

However, if peace and solitude with the family and away from the city is the goal, Yantian is the district to choose.

The Line 8 was built in 2016 though, making it easy for people to travel to and from Yantian. The accessibility that this line provided played a big part in making Yantian a plausible area to live in.

The Yantian District in Shenzhen is an area that has been well-developed for expat living. Recently, it has become a magnet for many businesses due to its favorable location and convenient transportation methods.

On average, a single apartment in the Yantian district can range from as low as 2,000 RMB to 6,000 RMB, with bigger ones (with multiple whole families) even reaching 13,000 RMB.

Take Your Future Into Your Own Hands

The history of Yantian District is long and illustrious, but it’s also incomplete. Much like many other districts in the Pearl River Delta region, this district has always been a crossroads for people from different cultures. It was an important port city during ancient times due to its location on the coast of Guangdong Province.

During more recent years, with increased economic development in China, many individuals have relocated here because they are attracted by what Yantian offers them – namely improved quality of life as well as opportunity for career advancement.

If you’re looking to take your future into your own hands or just want to be closer to nature without having to relocate all the way up north then now might be time to move to the Yantian district.