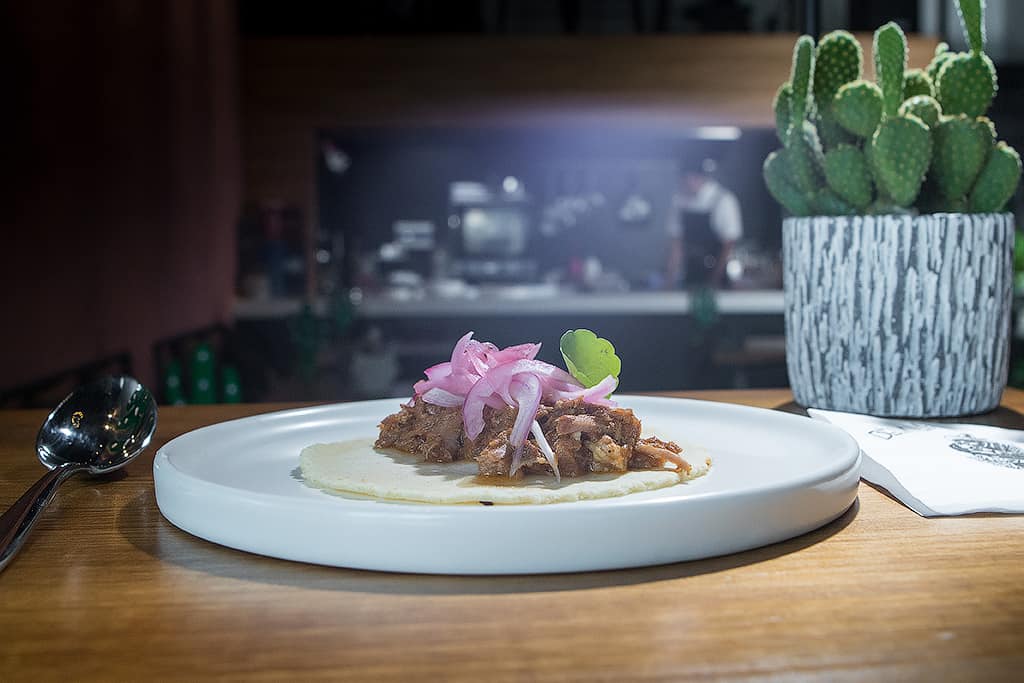 Mexican cuisine is one of the most loved foods in the world, and it’s not hard to see why there are so many restaurants now. As popular as these places are, outside of Mexico, they rarely truly represent what Mexican cuisine is. There are so many more ingredients, shapes, flavors, and colors. By looking deeper, you can find the real Mexico. At Bésame Mucho , you can try Mexican food like you’ve never experienced before.

From the moment I heard about Bésame Mucho, I knew I was in for something special.

The first thing that caught my attention was the location. Situated in the up-and-coming area of Nanshan, the restaurant is surrounded by the offices of the biggest tech companies in China. Bésame Mucho occupies a relaxing spot in the new Kaide Park shopping mall, just off the high street.

The restaurant boasts a cool outdoor seating area, which on the evenings is occupied with expats and locals alike enjoying dinner or just chilling with a couple of drinks. Inside, it’s clear that they are going for a modern, clean style. From the open kitchen and slick bar top to the windows the length of the wall and the second-floor stage that looks down on the restaurant. Think less family taqueria, and more hip bar. 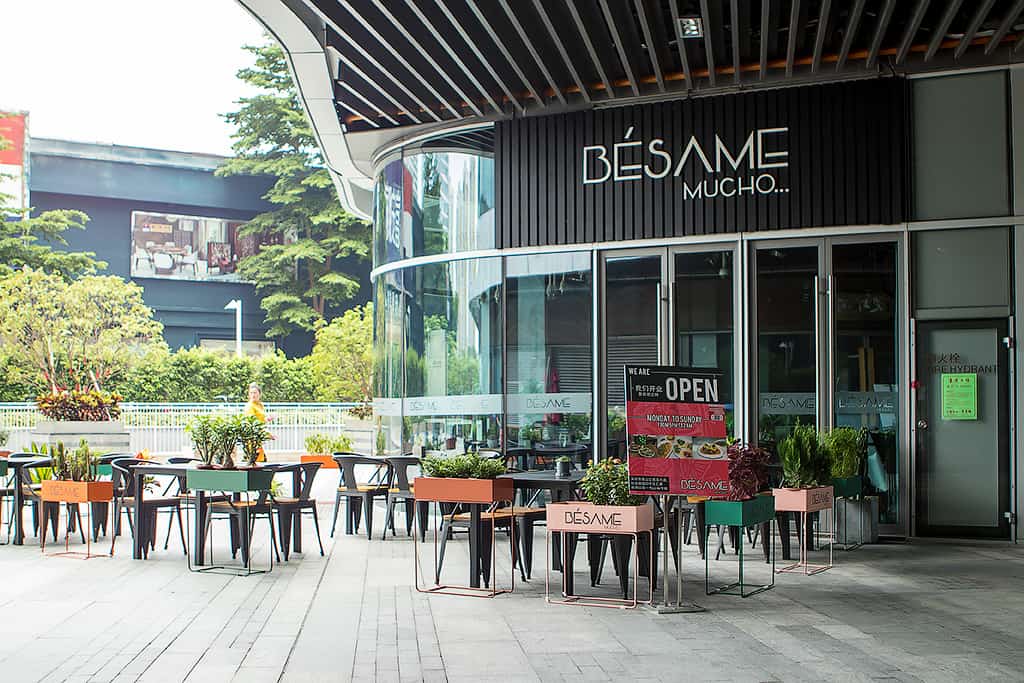 The second thing that made me stand up and pay attention to the restaurant was the people involved. Bésame Mucho is the idea of Christian Saldaña. When it comes to introducing Mexican cuisine and culture, Christian has shown over the years that he is a true ambassador for his country. What’s more, the guy knows how to organize a party.

The third thing was the food. When I started seeing photos all over my social media of what was coming out of the kitchen there, I knew I had to get myself down to Bésame Mucho. These were dishes I had never seen before. There were so many vibrant colors and the sort of presentation that demands your attention. This was Mexican food, but not as we knew it.

So there we were, to find out for ourselves. After several looks of the menu, we still couldn’t settle on what to order. So, we deferred to Christian to decide for us. We were not disappointed. 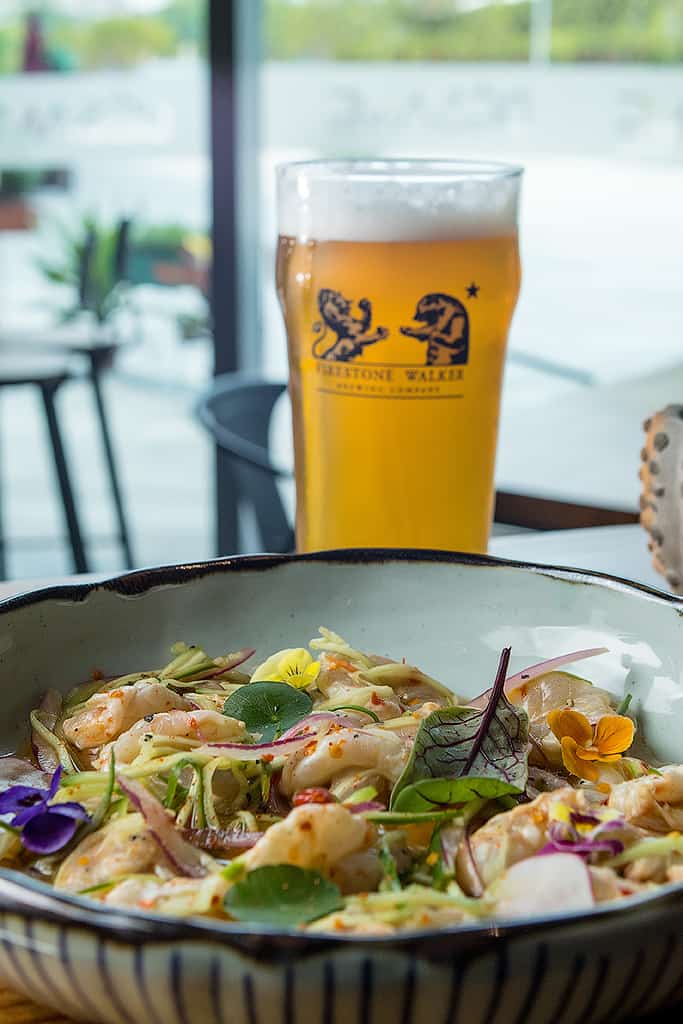 The first dish to arrive was the Aguachile. This is a real seafood treat originating from the north of Mexico. They take fresh shrimp, marinate it in citrus juices and pulverized chili, and then submerge it along with onions and cucumber. Think of it like the spicier, older sister of Ceviche that you wish were dating instead.

Next up is the Tuna Tostada, but with a brand new makeover. The chef has taken this old classic and has given it a modern twist by completely inverting the presentation. Where the tostada should be on the bottom, here it is on the top, and the toppings are on the bottom. And what toppings they are. You have the freshest tuna and avocado marinated with a tangy Ponzu sauce along with carrots, cucumber, and spring onions. By the time I’ve finished, it makes me wish I’d been eating all my tostadas upside down all along. 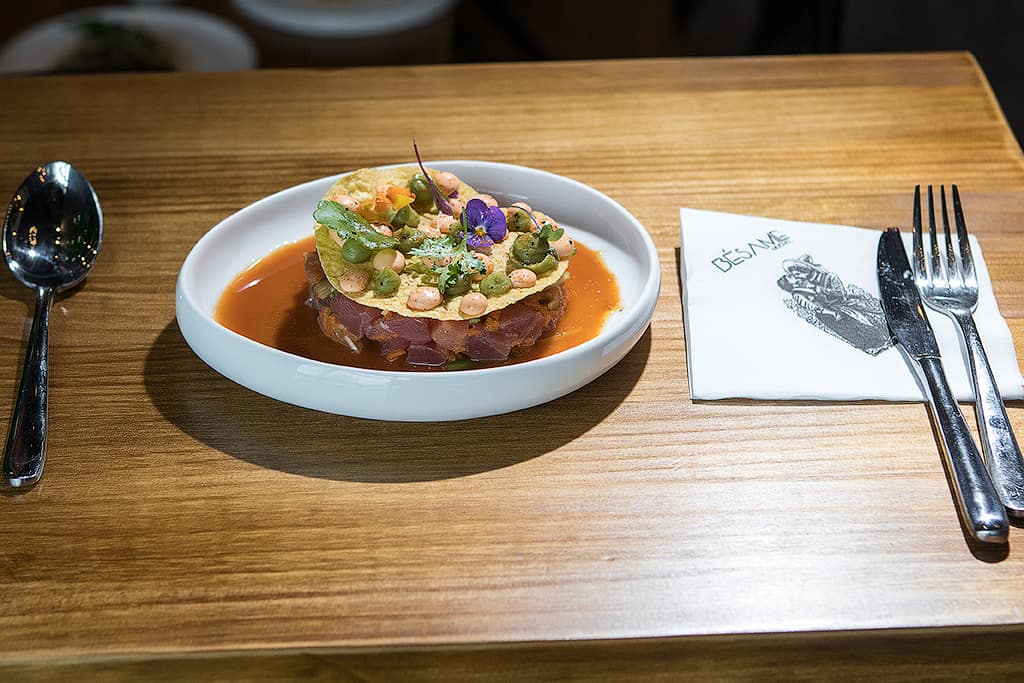 As we finished off our Tuna Tostada, the next dish arrived. It’s the first time I’ve ever laid eyes on a Tlayuda, but I like what I see.  Originating from Oaxaca, It’s a large crispy corn tortilla topped with chorizo, grilled tomatoes, refried beans, onions, and homemade mole sauce. The tortilla can be easily broken up to share amongst a group and is a perfect party starter. 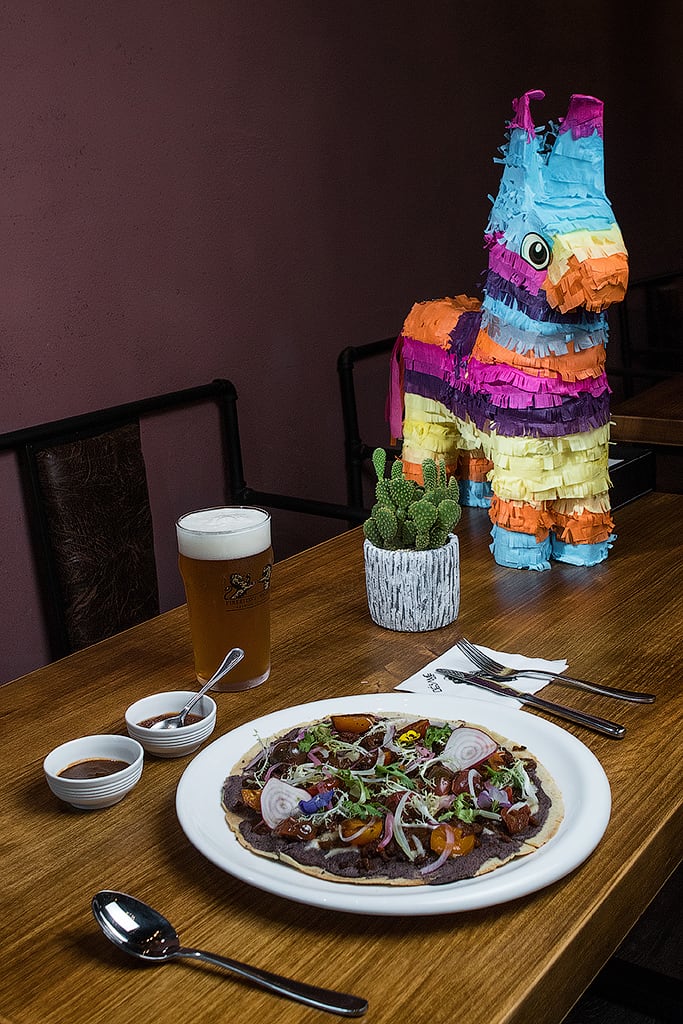 Of course, no trip to a Mexican restaurant can be complete without trying the tacos. The menu has six signature tacos and while reading the descriptions makes me want to order all of them, we end up limiting ourselves to the Carne Asada and Mayan Pork. The Mayan Pork drips with habanero chili, red onions, and lemon, which is so good it makes me want to order another just to wipe up the first with. Still, I think the Carne Asada has to be my favorite. The slices of grilled beef steak are really something else. 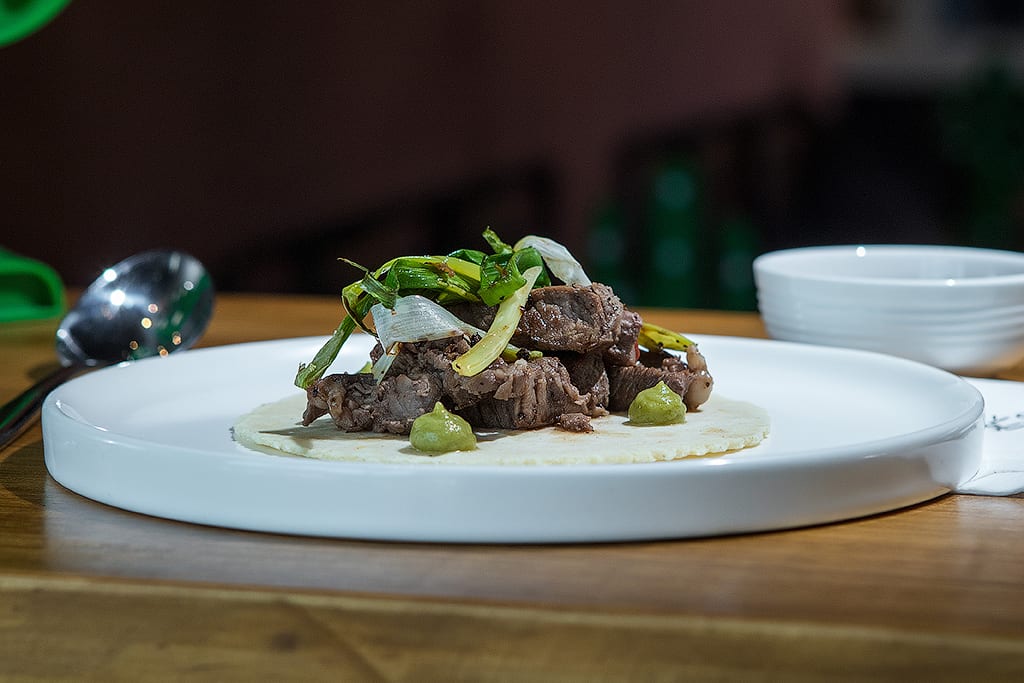 Finally, is our dessert, the Avocado Popsicle, which is a mouthwatering mix of avocado, dulce de leche, some lemon zest and dried berries, and the smallest amount of chocolate. In appearance, it looks like an ice pop, but it’s actually soft and can be scooped with a spoon much like a mousse. I think the Avocado Popsicle from Bésame Mucho is my favorite dessert in all of Shenzhen. For the freshness, for the creativity, for the originality, and quite simply, for the taste. 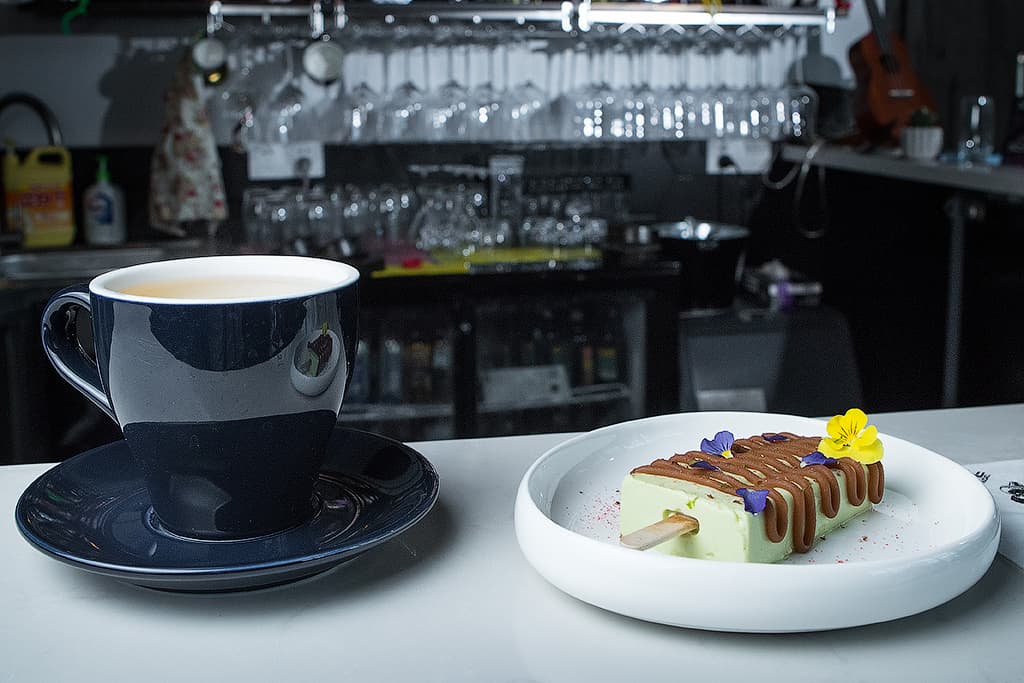 While as amazing as the food is – and it is amazing – Bésame Mucho is more than a restaurant. It’s a place for people to come and just hang out and meet new people.

If you are feeling lucky, then on Wednesdays you should head down to La Loteria nights. Think of it like bingo, but instead of using numbers, they use some cool retro illustrated cards with even cooler names. The games are free for customers to join and you can win anything from a drink to 10% off your bill and more.

On Thursdays, Bésame Mucho makes the most of its stage space with their Acoustic Session by Mark’s Music & Art Jam. Every week, some of the city’s most talented and creative musicians come down to jam and experiment. You may even catch Christian up there singing a tune or two. 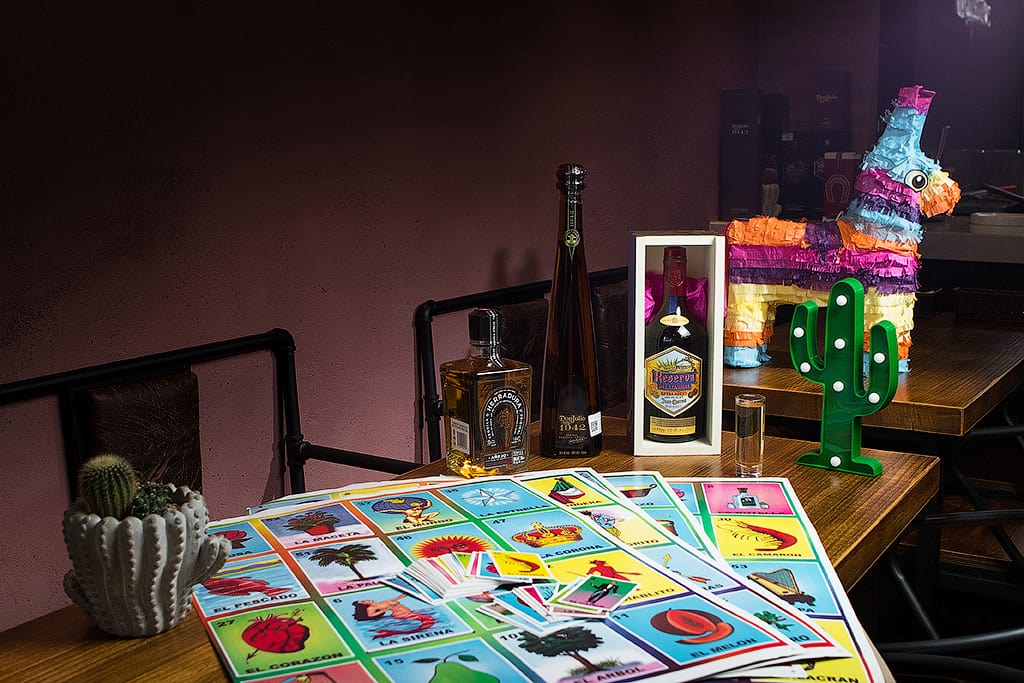 Bésame Mucho is the place to be on Fridays. From 7 to 9:30 pm, there is an international meet & greet, where people hailing from all over the world can get to know each other. The evening continues with live music from 9:30 pm and then a Latin party from 10:30 pm till late, late into the night.

Bésame Mucho is not solely about partying though. Every Sunday from 4 pm, there is a free Spanish class available to customers. You can come, learn a few words, and then feel free to practice with Christian and the rest of the staff.

So come and stop by at Bésame Mucho. Experience Mexican food like you’ve never experienced it before, and stay to enjoy the fantastic company and, who knows, you may even make a friend or two you didn’t have before the evening had started.